The Conservative Amish Mennonite Conference was brought into being in 1910 at the invitation of the ministers of the Pigeon River congregation, near Pigeon, Michigan, who invited ministers of other similar churches to gather with them in a ministers meeting. The meeting was held 24-25 November 1910 (an error in the official report of this meeting sets the date as 24-25 November 1911.)

The purpose of the meeting was set forth in the first resolution: "That we stand more closely together in the work of the Lord, to maintain peace and unity in the so-called Conservative Amish Mennonite churches."

The second meeting was held with the Maple Glen congregation, near Grantsville, Maryland, 27-28 May 1912. With this session the meeting became established as an annual conference, which it continued to be at this writing. Attending were 16 ordained men from Maryland, Pennsylvania, Ohio, Indiana, Michigan, Iowa, and Missouri. For the most part, those participating in this conference session represented congregations which, as the name of the conference indicates, felt that the established conferences of that day came short of certain Scriptural requirements, and that a more conservative emphasis was needed in the application of the Word of God than these afforded. On the other hand, it was felt that the Old Order Amish churches left certain things to be desired in the way of an aggressive church program. Most of the congregations interested in this new conference movement stemmed from this latter group and had never been affiliated with any conference, while in several cases their background included contacts with the district Amish Mennonite conferences. 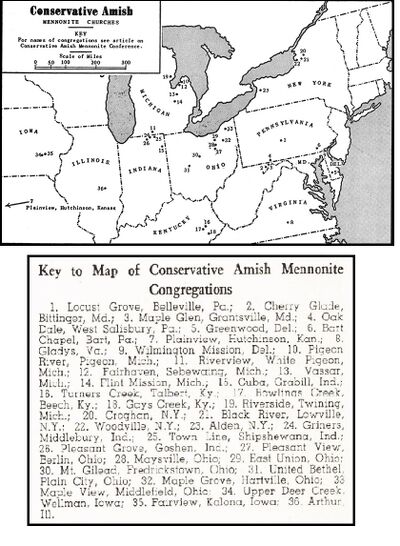 As the conference met year after year and its policies became more clearly outlined, other congregations applied for membership, while a few which had been represented at the first meetings withdrew. In this early stage of development, the conference functioned in a very informal way. It had no written constitution and bylaws to guide it in its work. In fact it did not adopt one until 1945. (Complete text of constitution and by-laws appears in conference report of that year.)

From its beginning, the conference accepted the 18 articles of the Dordrecht Confession of Faith as an official statement of its belief. It insisted on separation from the world for its membership in personal, social, and economic life, including such details as fashionable attire, use of tobacco and intoxicants, participation in war in any form, worldly business associations, secret societies, life insurance, and holding of government offices. Correspondingly it sought to promote a positive Christian testimony through evangelism, benevolence, and personal sanctification.

At its second meeting, in 1912, the conference took steps toward establishing an orphans' home, which plans materialized by 1914 in the Amish Mennonite Children's Home, near Grantsville, MD, an institution which cared for many destitute children until it was closed in 1938 because of state restrictions, which among other things made interstate placement of children impossible.

At this same 1912 session a Sunday-school conference followed the church conference sessions and has remained an annual feature for the promotion of Sunday-school work throughout the congregations.

In 1912 the conference approved a plan for systematic, yearly visitation of all its congregations by ministers appointed for that purpose, who were to preach a number of sermons for each congregation. By 1918, through conference sanction, some of these efforts took on the form of Bible instruction meetings, which were carried on in varied form and frequency since, in most of the congregations.

In 1917 the conference assumed joint responsibility for the publication of the Herold der Wahrheit, a German-English semimonthly periodical, launched in 1912 by a number of interested persons in the Old Order Amish churches.

In the same year the first definite action was taken in mission work, when it was decided that M. S. Zehr should go to the Ozark Mountains of Missouri to preach there if opportunity afforded and investigate the possibility of opening mission work. By 1919 a mission board was appointed by the conference. Besides numerous missionary efforts carried on locally by individual congregations, the conference established under its general mission board in 1929 a city mission at 2124 E. Williamson St., Flint, Michigan, and in 1946 a rural mission on Turner's Creek, near Talbert, Kentucky, with a branch station on Bowling's Creek, near Beech, KY, about one year later. In 1948 the Mennonite Board of Missions and Charities invited the conference to appoint representatives to its board, and after that time it had two representatives on this board. In 1950 the conference appointed its first foreign missionaries, a couple to serve under the Eastern (Lancaster) Mennonite Board in Luxembourg, and established its own work in Espelkamp, Germany. In the 1950s the following additional home missions were established: Austin, Indiana, Gays Creek, Kentucky, Mount Morris, Michigan, and Blountstown, Florida.

In 1937 the conference elected a representative on the Peace Problems Committee of the Mennonite General Conference (MC). In 1941 it appointed a representative on the Mennonite Central Committee. In co-operation with this committee it contributed material aid and personnel for relief after World War I and during and after the last war, as well as participating in the Civilian Public Service program.

In 1948 a ministers' Bible study-discussion meeting was held which became a regular annual feature.

Not officially affiliated with the conference, but working with it in matters of mutual interest such as relief and the recent CPS program, were a number of congregations generally known as "Conservative Amish Mennonite—Not under Conference," which were usually listed with this conference in Mennonite statistics. These congregations in 1954 numbered 1,664 members.

The conference ministers were almost always drawn from among the brotherhood of the congregations which they were to serve. Most of the ministers were ordained through the lot, but this practice has changed considerably by the 1950s..

Among the founders and earliest supporters of the conference, the following bishops may be named: S. J. Swartzendruber of Pigeon, Michigan, who proposed and guided the first meeting; Joel J. Miller of Grantsville, Md., in whose congregation the first general public conference was held, as a result of the preliminary meeting in Michigan; C. M. Nafziger of Lowville, New York; Jonathan Troyer of Indiana; John L. Mast of Belleville, Pennsylvania; Joshua King of Ohio; and the ministers, M. S. Zehr of Pigeon, Michigan; Jacob S. Miller and Jonas B. Miller of Grantsville, Maryland; Jonas D. Yoder of Pennsylvania, and Gideon A. Yoder of Iowa.

In 1954 the total membership of the conference was 4,259. There were 36 congregations, of which five were in Pennsylvania and Maryland, two in Delaware, four in New York, one in Virginia, three in Kentucky, six in Michigan, seven in Ohio, four in Indiana, one in Illinois, two in Iowa, and one in Kansas. Fourteen bishops, 42 ministers, and 8 deacons served in these congregations. -- Ivan J. Miller

In 1964 the Conservative Mennonite Bible School was moved from the Pleasant View meetinghouse near Berlin, Ohio, to the village of Rosedale on Rosedale Road, Irwin, Ohio. Known as Rosedale Bible College (formerly Rosedale Bible Institute), the school offers courses in Bible, theology, evangelism, teacher training, music, and related subjects on both high school and college levels. Credits are transferable to various colleges and seminaries. The conference missions and service offices, known as Rosedale Mennonite Missions (also known as Conservative Mennonite Board of Missions and Charities), are located on the same campus. So also are the conference archives.

In a 2017 interview, CMC executive director Brian Hershberger expressed concern with the name "conservative," due to its connotations of political conservatism or plain dress. At the July 2017 meeting, other ministers said "Mennonite" associated them with Mennonite Church USA.