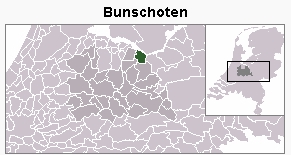 Bunschoten, a village in the Dutch province of Utrecht on the shore of the Zuiderzee, in which there was once a Mennonite congregation with its church building; it was sometimes called Spakenburg, the name of the nearby village. It must have been in existence in 1581; about this time Leenaert Bouwens baptized 13 persons here, and in 1606 the Reformed preacher complained about their "audacious" conduct, for they already possessed a meetinghouse where they could meet undisturbed. In September 1647 delegates from Bunschoten took part in the conference of Waterlanders in Amsterdam. In 1733 the church contributed 112 florins to the Fund for Foreign Relief.

In the middle of the 17th century, when the shortage of preachers in the Dutch churches was very acute, the church at Bunschoten had its own minister. After the death of Jan Barents (1685), the congregation was served by Teunis Adriaansz, preacher at Huizen. After his death in December 1688 the church at Utrecht came to its aid. In 1699 Bunschoten was called a subsidiary of the Amersfoort congregation. In 1702 Bunschoten suffered a flood and the congregation suffered severe losses. From Dutch Mennonites they received contributions of 4,000 florins. In 1704 they had again received a preacher in Klaas Jelisz Huisman; but they were unable to raise funds for his salary. The other congregations could no longer make adequate contributions, and the church died out shortly after 1731, the children being received into the Reformed Church. The church building passed into the possession of the civic community, which sold it at the end of the 18th century.