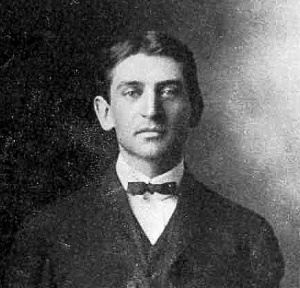 John David Brunk, music composer and teacher, son of Samuel and Susanna Brunk, was born 13 March 1872 near Harrisonburg, Virginia. He was married to Mary Kathryn Martin of Hagerstown, Maryland, 2 September 1897. They had seven children.

After finishing his elementary schooling in the local school near the homestead, he went to Bridgewater College for his academy and early music training. He spent two years at New England Conservatory, Boston, Massachusetts, where he studied harmony and composition with George W. Chadwick. Later he attended American Conservatory, Chicago, Illinois. His advanced studies here were under Adolph Weidig. Besides having a thorough training in theory and composition, he was a gifted pianist as well as vocalist. He taught three years at West Central Academy, Mt. Clinton, Virginia, and five years at Bridgewater College, Bridgewater, Virginia, before coming to Goshen College, Goshen, Indiana, in 1906. Here he organized and started the music department, serving as director of the school of music and professor of voice and theory, 1906-1913.

Brunk was a member of the Mennonite Church (MC) and a leader in church music. As editor, he headed a music committee appointed by the Ohio and Virginia conferences to compile a hymnbook for use in Sunday school and the church, the Church and Sunday School Hymnal, published in 1902, and in 1911 he edited a supplement to enrich the hymn materials in the book. His next published work was a book to be used for singing classes in the churches, Educational Vocal Studies, in 1912. In 1913 the Mennonite Church General Conference (MC) appointed a music committee to compile and publish a book of Gospel songs, known as Life Songs. He was appointed secretary and music editor of the committee, a position he held until his death. Life Songs was published in 1916. During the years 1913 and 1914 he, in cooperation with John W. Wayland as hymn writer, composed a cantata containing songs and hymns of the life of Christ called Salvation Story, which was never published, although some numbers from this manuscript appear in Life Songs and in the Hymnal. His last work as editor was as music editor of the Church Hymnal. His fine work in selecting, arranging, and composing of tunes made this book a monument to his memory. It was published in 1927.

John D. Brunk was not only a compiler of hymns and tunes but also an able composer, writing many hymn tunes and Gospel song tunes in the spirit of the church and for her use. He was also greatly loved and respected by his many pupils. He was untiring in his efforts to raise the standard of church music in the Mennonite Church. He died 5 February 1926 in his home near Elkhart, Indiana. Interment was in the Prairie Street cemetery, Elkhart.