From GAMEO
Revision as of 15:53, 2 December 2013 by SamSteiner (talk | contribs) (Update MC USA Archives link)
(diff) ← Older revision | Latest revision (diff) | Newer revision → (diff)
Jump to navigation Jump to search
A checked version of this page, approved on 2 December 2013, was based on this revision. 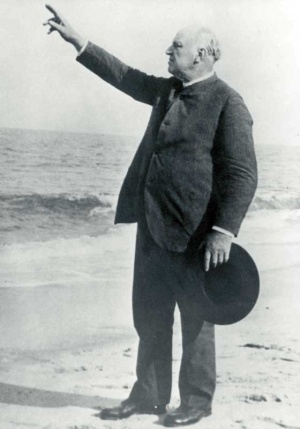 George Reuben Brunk, prominent leader of the Mennonite Church (MC) in Virginia, the son of Henry G. and Susan Heatwole Brunk, was born at Geneseo, Illinois, on 31 December 1871. When he was two years old the family took a prairie schooner for the Kansas plains. George's father died eight days after their arrival and as a consequence the first years here were difficult ones. He married Katie Wenger of Harrisonburg, Virginia in 1900. After 10 years of service in Kansas the Brunk family moved to Denbigh, Virginia in 1910, where he became bishop of the Mennonite churches in southeastern Virginia.

Brunk early acquired a library of his own which he made constant use of in his intellectual development. He was saved for work in the Mennonite Church by the appeal and prayers of his mother, the counsel of his uncle R. J. Heatwole, and the tactful solicitation of John S. Coffman. He was ordained to the ministry on 1 October 1893 and to the office of bishop on 23 October 1898. He served the church at large as an evangelist and a Bible conference speaker. He served as a member of the Mennonite Board of Education for many years, and took an active interest in the Eastern Mennonite College as vice-president of its board of trustees until 1924, and as a member of its Religious Welfare Committee. His literary contributions are found in a book entitled Ready Scriptural Reasons (Scottdale, 1926) and articles in The Sword and Trumpet, a quarterly journal which he established in 1927 and edited until his death on 30 April 1938.

His leadership in the Mennonite Church included both progressive and conservative elements. He was an advocate of new methods of work, but he vigorously fought the introduction of modernism and Calvinism in Mennonite churches.

He was the father of nine children, among them Bishop Truman Brunk of Denbigh, Virginia, and George R., II, and Lawrence, sponsors of the Brunk Brothers' Revival Campaign.