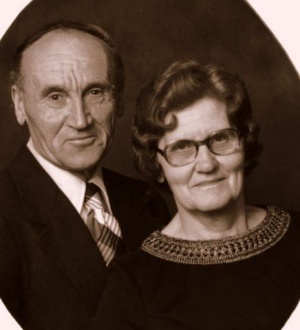 In 1922 the Brucks family moved from Russia to Germany. A year later they immigrated to Canada, arriving in Quebec, where they lived for a short time. From Quebec, the family moved to several communities in Manitoba and Saskatchewan. Eventually they settled in Gem, Alberta. In 1936 the family resettled in Black Creek, Vancouver Island. In 1937 Jacob was baptized and became a member of the Black Creek United Mennonite Church. It was here that Jacob married Mary Hildebrand.

In 1943 the Jacob Brucks family moved to the Fraser Valley, settling on a farm in Chilliwack, British Columbia. Here he became active in the East Chilliwack Mennonite Church (now Eden Mennonite Church). In 1954 he became a member of the Mennonite Benevolent Society and a year later became a director on the Board of this Society. To devote more time for involvement with the society, he sold his farm in 1961 and moved to Abbotsford, British Columbia.

The same year he was appointed manager of the Menno Private Hospital and served in this capacity until 1977. To adequately discharge these new responsibilities, Jacob continued his studies, earning a Certificate in Hospital Administration from the University of Manitoba. Jacob’s tenure as manager marked a time of rapid development. Several buildings and a chapel were added. The hospital became a provincially funded extended care facility. Jacob had a heart for elderly people and spent countless hours attending to the needs of Menno Hospital residents.

Throughout his adult life Brucks served the church in a variety of ways. At the Eden Mennonite Church he was elected Sunday School Superintendent. In the Clearbrook Mennonite Church he served as treasurer. He also served on the Finance Committee of the Conference of Mennonites in British Columbia and served at the Gospel Mission in Vancouver.

Jacob and his wife Mary enjoyed traveling and managed to tour most of the states in the USA. After Jacob retired, he and his wife traveled to Europe. Every autumn they made a trip back to the Prairies to relive memories of their earlier years. Jacob also enjoyed gardening. His flowers were his pride and joy. As Mary's health deteriorated he became her prime caregiver and continued until such a time that she became a resident at Menno. Mary died on 28 September 1996.

After Mary's passing Jacob moved to Vernon, British Columbia, where his daughter resided. Here he once again was able to do some gardening. He also built a model railroad including tracks and villages. While in Vernon he attended the German Church of God.

Jacob was a good story teller, and with his sense of humour kept everyone's attention. In his younger years he also served the church as a lay minister, preaching at special occasions. He had a simple faith in God. After a short time in hospital Jacob passed away on 9 September 2004 in Vernon, BC.

Jacob and Mary had two children, Richard and Laura.