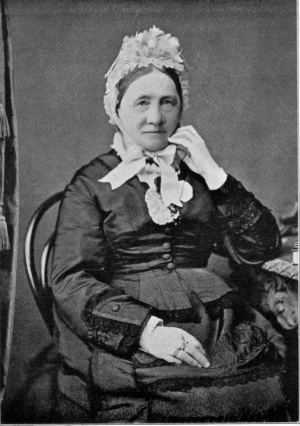 She spent her youth in the home of her uncle S. D. Cremer in Norden, for her mother, his sister, had died at her birth. Her youth passed happily and harmoniously under the careful supervision of her uncle. Very active intellectually, she most advantageously assimilated the manifold good impressions which she had absorbed from the family traditions and the wholesome church life, borne by a Mennonite consciousness. On 12 November 1830 she was married to Isaak Brons at Emden, a deeply religious man, also borne by a definitely Mennonite consciousness. In their thoroughly happy marriage of 55 years' duration she stood faithfully at his side as a companion of equal rank and reared her large family in complete harmony with her husband. She took a lively interest in all of her husband's work and was his perfect complement. When in 1856 following an illness he was compelled to drop his customary occupations and use his eyes only a few hours daily, she regularly devoted several hours a day to reading to him all that had formerly interested him. Thus she won a deeper than customary insight into scientific, religious, and social fields.

She was especially interested in the history of the Mennonites. The competent preachers who served the Emden church during her lifetime, van Hülst, Samuel Cramer, who later became professor at Amsterdam, and J. P. Müller, stimulated her to extend and deepen the knowledge she had gained by private study of Menno's writings and other works. Thus various larger and smaller articles came from her pen, extracts from the works of greater Mennonite significance. Finally she worked these articles over into a whole with a view to the generation growing up about her. Thus the book mentioned above gradually took form. At that time the German Mennonites lacked a survey of the total Mennonite picture. Aside from several monographs like those of B. C. Roosen and C. Harder on Menno Simons and D. Philips, only the Mennonitische Blätter, founded in 1854 by J. Mannhardt in Danzig, offered the German Mennonites an opportunity to become acquainted with Mennonite interests, history, and present conditions. Antje Brons was an unusually zealous and active worker on the Mennonitische Blätter even in her advanced years. The 1880s were particularly eventful for the development of the German Mennonites. In 1880 Dr. Ludwig Keller's Geschichte der Wiedertäufer und ihres Reichs zu Münster appeared, the first of the series of books which this scholar published in rapid succession on the beginnings of the Anabaptist movement, and which rendered the Mennonites a most distinguished service.

In 1884, when the first edition of her book was published, representatives of the Mennonite churches of Germany met in Berlin in November at the instigation of Dr. S. Cramer and discussed the formation of a union of these churches, which later came into being as the Vereinigung. Among the most ardent promoters of this union were Antje Brons and her oldest son, consul Bernhard Brons, Jr., of Emden. Until her death she took an active part in building up the inner structure of the Vereinigung. She kept up a correspondence with all the promoters of the new organization and supported it in various other ways. Her ideal was a union of all German Mennonite congregations, similar to the Dutch Algemene Doopsgezinde Sociëteit, which would permit the congregations to remain independent and yet support each other in preserving the Mennonite way of life. Several other articles appeared from her pen in her old age, warmly sponsoring the Mennonite ideal of a Christian community. This kind of work gave her the deepest satisfaction and earned the respect of wide circles of Mennonites for her unflagging energy. She died in Emden 2 April 1902 at the age of 91 years.