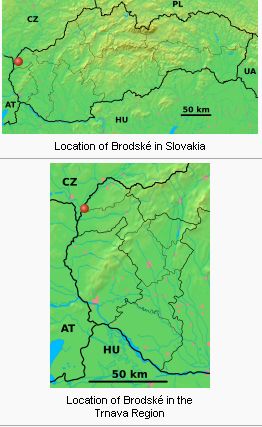 Brodské (German, Protzka), a Slovak village formerly in Hungary, later in the Nitra (German, Neutra) province of Czechoslovakia, and now in Trnava Region of Slovakia (coordinates: 48° 41′ 40″ N, 17° 0′ 40″ E). During the severe persecution of 1547 the Hutterian Brethren who had to flee from their Bruderhofs in Moravia turned to Hungary, where they were given domicile in Berencs (Präntsch) by Count Franz Nizry von Bedek and in Holitsch and Schossberg by Peter Bakich de Lák. Here, with considerable dif­ficulty in clearing the land, they built houses. One of the Bruderhofs set up at that time was Protzka. Here in 1554 the deacon Jörg Ladendorfer died, and on 1 December 1556, in his fiftieth year, Peter Riedemann, the revered leader, whose confession of faith, the noted Rechenschaft, was printed probably by 1545 and who was also the author of a long series of letters, which are among the principal sources for the study of Anabaptist doctrine, as well as nearly fifty songs. He had been a preacher for 27 years.

On 4 March 1597, Hans Zuckenhammer was publicly excommunicated in Protzka. After serving as a preacher for seventeen years, he proved himself unworthy by his unjust decisions and other wrong deeds, and finally rebelled against his re­moval from this office in Lewär. Before his death he "made his peace" with the brotherhood, and was restored to fellowship; he died in Protzka on 29 April 1598.

On 4 May 1605, rebel Hungarians attacked the Bruderhof here. Most of the Brethren succeeded in escaping before the soldiers plundered and burned the house. Three men and several women who had remained were mistreated. Not until 1616 did the Brethren rebuild, having first concluded a new con­tract with the current owner, Michael Czobor, who wanted them to resettle there. Work was begun on 4 June. But by 6 February 1621, the Bruderhof was at­tacked by Polish auxiliaries of the imperial army and pillaged anew. On the afternoon of 28 April 1623, a fire broke out in the smithy, which de­stroyed half the house with the goods in it, as well as some of the cattle. In the late fall the Bruder­hof was involved in the conflict between Gabriel Bethlen and the emperor. When Janos Czobor plundered Lewär, others following his example fell upon Protzka on 28 October, plundering, driving away the cattle, and finally burning down the whole house including the newly rebuilt part. But in spite of these bitter experiences the Brethren again rebuilt their house, completing it in a few months.

In 1625 the Brethren were struck by new misfor­tune. Without any justification the baron demand­ed of the Brethren a tribute of 200 talers, several knives, and a piece of cloth. The Brethren pointed out that their house in Protzka had been burned twice in three years, and that they had been charged an extremely high price by the baron for protection during the Turkish invasion, and were therefore unable to pay the required sum. Because of this re­fusal the householder and the purchaser, "two aged Brethren," were arrested. The brotherhood sent a delegation consisting of a preacher and two lay Brethren to the baron, who was not at home, but "several miles behind Kascha(u)," to ask for the re­lease of the prisoners. After his return from the Landtag at Oedenburg, Czobor summoned the eld­ers of Protzka and Sobotište "to settle the debt once for all." Czobor owed the Brethren 313 florins, which he wished to cancel against a debt of 80 florins the Brethren owed him, and also demand­ed the payment of 2,000 talers in return for the pro­tection he had given them during the Turkish dis­turbance, in order to pay for the fields the Turks had devastated, though Czobor had fully compen­sated himself for the lodging he had given the Brethren by confiscating all their hogs. When they rejected this demand he threatened to have the Bruderhof plundered by his Hussars, and could only with difficulty be deflected from this plan. After lengthy negotiations he finally agreed on a sum of 100 florins and a quantity of grain and promised to observe the terms of the contract signed with the Brethren by his father.

Scarcely was this danger past, when a band of fifty imperial cavalrymen of Wallenstein's army plundered Protzka on 21 September 1626, and took near­ly all the cattle. On 20 February 1627, the Bruderhof was attacked by wandering Croats, and more cattle taken away. When more and more imperial troops continued to threaten the Moravian-Hungarian bor­der, the Brethren were compelled to seek safety in the castle. In 1628 their oppressor Czobor died, and his widow demanded a payment of 40 florins. The refusal of the Brethren to make this payment was countered by her taking their four best oxen.

On 5 March 1632, a band of newly recruited Croats and Hungarians fell upon the Protzka Bru­derhof at night, and robbed it of much woolen and linen cloth. The new baron, Emmerich von Czobor, had his Hussars pursue the robbers and recover the booty, but the Brethren did not get half of it back. An imperial army under Puchheim's command crossed into Hungary in 1644 and plundered Protz­ka, even finding the caches where the Brethren had hidden some goods, and took everything away. On 27 July 1645, Protzka was plundered again; all the buildings but the tannery and the mill went up in smoke, and the tanner was murdered.

In 1662 the householder and deacon Hans Schütz died in Protzka. After an abnormally cold spring the crops failed and famine set in, "so the brother­ hood came into dire poverty, for at Lewär, Protzka, and Johanni they had only empty straw to harvest."The attack by the Turks in 1663 finally brought the Bruderhof to an end. On 4 September 1663, the house in Protzka was robbed; even the persons who had fled to the woods were carried away by the Turks. After making an attack in Moravia the arsonists returned, finished plundering Protzka, drove away the cattle, about 100 oxen and cows and 1,350 sheep, and burned down what was still standing. In the neigh­boring St. Johannes the Brethren were able to main­tain themselves, but Protzka was apparently aban­doned for good.