From GAMEO
Revision as of 20:48, 25 August 2021 by RichardThiessen (talk | contribs) (Updated population of province.)
(diff) ← Older revision | Latest revision (diff) | Newer revision → (diff)
Jump to navigation Jump to search
A checked version of this page, approved on 25 August 2021, was based on this revision.

British Columbia (BC) is the westernmost of Canada's provinces. It is located along the Pacific Ocean and is bordered by the U.S. state of Alaska on the northwest, on the north by the Yukon and the Northwest Territories, on the east by the province of Alberta, and on the south by the U.S. states of Washington, Idaho, and Montana. With a total area of 944,735 km2 (364,764 sq mi), it is the 5th largest province/territory in Canada. British Columbia is mostly mountainous, with 60% of the province covered by forests. Only 5% of the province is composed of arable land, with most agriculture located in the Fraser Valley and the Okanagan. The total population in 2021 was estimated to be 5,174,724, making it the third most populous province in Canada. Vancouver is the largest city in the province, while Victoria is the capital.

Europeans began to settle in the area in the mid-18th century. At that timme, the aboriginal population in the region was fairly large, representing half of all aboriginal people in present-day Canada. Smallpox epidemics amongst the aboriginals caused many deaths, with 50% of the aboriginal population dying in the Great Smallpox Epidemic of 1862 alone. British control was established through the explorations of James Cook in 1778 and George Vancouver in 1792-93. The fur trade led to the establishment of trading posts in the area by the North West Company and Hundson's Bay Company. The Fraser Canyon Gold Rush of 1858, followed by the Cariboo Gold Rush of 1862, led to a further influx of settlers in the area. 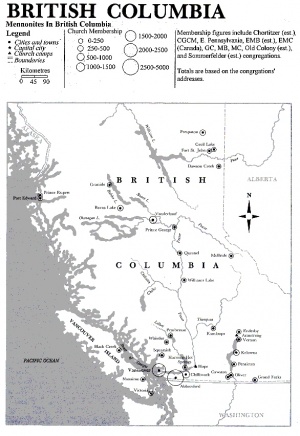 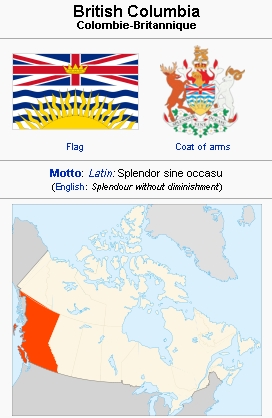 In looking for a means of livelihood many Mennonites went to the nearby city of Vancouver. A permanent group developed there, and the city now has two sizable congregations, General Conference Mennonite and Mennonite Brethren.