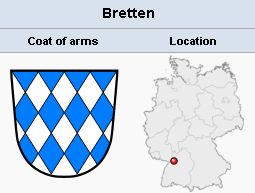 Bretten (population in 2006, 28,157), a city in the Kreis of Karlsruhe in Baden. In the vicinity of the town of Bretten, the place of Philip Melanchthon's birth, the Anabaptists were already numerous by 1528 among the populace, whose desire for reform in religious conditions remained unsatisfied. Information concerning the spread of the new doctrine is still quite fragmentary. The Anabaptists held their meetings in lonely regions and in forests which afforded them some protection from persecution. About 1531 their services were often attended by 200 to 300 persons. As meeting places they used isolated homes in Neibsheim, Hagenmühle near Bauerbach, as well as Mühlen near Gondelsheim and Flehingen, and also the woods between Flehingen and Bretten. Many participants suffered martyrdom for separating from the old church (see Wolf Kürschner). From figures compiled by the Hutterian Brethren it is known that in the city of Bretten alone nine Anabaptists were executed, including Friedrich Schuster of Bretten and Wendel Maurer (Beck, 279) who are mentioned by name; another source names Wolf of Gritznis (Wolkan, 30), who baptized, and was therefore a preacher.

The oldest court records giving information about the spread of Anabaptist doctrine are found in Bauerbach, a village (1910, 786 inhabitants) which at that time belonged to the bishopric of Speyer, and which is today still almost entirely Catholic, where there had long been dissatisfaction with clerical rule. The clergy were aware of this spirit of dissatisfaction; they no longer trusted the populace and behind the most innocent movements suspected anti-ecclesiastical trends. Thus the bailiff of the local chapter, Peter Ochs, saw in a rifle-match planned in the summer of 1530 by the people of Bauernbach merely a pretext for an Anabaptist meeting. The Anabaptists openly resisted the church by refusing the last sacraments, which happened for the first time in the fall of 1530, and which was punished by refusal of a church burial as well as close observation of several families, who were suspected of giving lodging to strangers passing through. Several fled for fear of punishment; on their return they were imprisoned. Their preacher was Konrad Scheid, a citizen of Bauerbach, who had also fled, but who returned in February 1531 and conducted services in the various homes (Bossert, 73; Wolkan, 31). He seems to have avoided imprisonment by a second flight. The measures against the Anabaptists were not strictly carried out, for the mayor himself was considered one of them. Andreas von Neiss, who died as a martyr at Neuburg a.D. before 1535, preached and baptized in Bauerbach (Wolkan, 29). Most of the adherents of the persecuted congregation probably immigrated to Moravia; emigrations from Bauerbach are mentioned in the records as late as 1544 (Bossert, 74).

The Anabaptists also attained a considerable following in Kürnbach, a village located east of Bauerbach, today almost exclusively Protestant (1910, 1,372 inhabitants). Here Blasius Kuhn of Bruchsal preached their doctrine from about 1530 to 1532. At Zaberfeld Michael Jungmann from Kürnbach was baptized with four companions. He was soon discovered and arrested, but gained his freedom by recanting, fled to Moravia, and later settled in Durlach, where he renewed contact with his home town. Meanwhile Anabaptist doctrine won new adherents in Kürnbach because of the inadequacy of the parson; they can be traced to the end of the 16th century (Becker, 113 ff.). Also in Büchig, Flehingen, Gondelsheim, and Neibsheim Anabaptist doctrine had found entry between 1531 and 1538 (Bossert, 75). But their further expansion was violently suppressed, at that time by the Catholic Church, and later by the Reformed and Lutheran clergy.

In 1589 the Reformed church council of the Palatinate had ceremonious attempts made to convert four Anabaptists at Bretten. Summoning all his scholarship, the Reformed pastor George Henfell tried to make it clear to them that they were following false doctrines. On 17 March 1589 he wrote to the council that he had done this very difficult task almost unaided, and had become "hoarse and almost sick" in consequence. In the presence of the officials he had explained to "the Anabaptist priests" the Christian faith, the holy sacraments, as well as the Ten Commandments and refuted their errors according to the "Frankenthal colloquium and other learned books." He was successful with only one of them, Wendel Oberholtzer; the others declared that they stood by their faith and would leave the country (Hege, 147). The Anabaptists not tolerated in the Palatinate for the most part still went to Moravia.

After the Thirty Years' War adherents of the sects outside the established churches were welcomed to rebuild the devastated country. A number of Mennonite families expelled from Switzerland settled near Bretten and formed the Wössingen congregation; in the second half of the 19th century a second congregation was formed on the Heimbronnerhof by the Michael Hahn group. The census of 1910 showed 80 Mennonites living in the district of Bretten (see Baden); they lived at the following places: Bretten 1, Bonartshäuserhof near Gondelsheim 17, Erdbeerhof near Gondelsheim 7, Heimbronnerhof near Stein 5, Menzingen 7, Talmühle near Ruit 8, and Wössingen 27. In 1952 the congregation had a membership of 30 souls (27 baptized members), with an elder and two preachers.