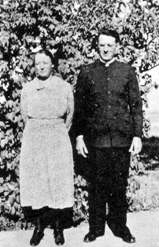 Daniel David Brenneman: minister of the Mountain View Mennonite Church near Creston, Montana, was born on 16 September 1906 near Milford, Nebraska, and died at Creston, Montana in September 1975. He married Mary Ellen Kauffman on 10 November 1926. They were the parents of two sons and two daughters.

The Brenneman family moved from Nebraska to Tofield, Alberta in 1913, and it was there that Daniel received his early education. He confessed Christ as his Saviour during a series of evangelistic meetings in Tofield, and was baptized and received as a member of the Salem Mennonite Church on 15 September 1918. He spent two winters studying at Hesston College in Kansas, became active in the Sunday School work of the Salem Mennonite Church, and later attended classes of the Alberta-Saskatchewan Mennonite Conference's Winter Bible School.

In 1934 Daniel Brenneman became aware of some of the challenges facing the Mountain View Mennonite Church near Creston and felt a call to serve that congregation. There was no immediate response by the conference, but at the 1940 conference sessions the matter was raised. After further deliberations, the Salem congregation and the Alberta-Saskatchewan Mennonite Conference approved the ordination of Daniel Brenneman for service in the Mountain View Mennonite Church. The ordination took place on 29 December 1942.

Daniel Brenneman served the Mountain View Mennonite Church as Assistant to Senior Pastor John G. Hochstetler from 1943 until 1967 when he became Senior Pastor. He served in that capacity until age and health problems resulted in his partial retirement. Thereafter he served as Assistant Pastor until his death in 1975.

Brenneman, as a farmer, demonstrated a great love of the land. He was also an avid outdoors man who loved the many outdoor recreational hiking, hunting and camping opportunities available in the Creston and nearby park areas. In the conference, his home congregation, and in the community, he demonstrated strong organizational skills. He was keenly interested in Biblical prophesies and took delight in memorizing long passages of scripture.