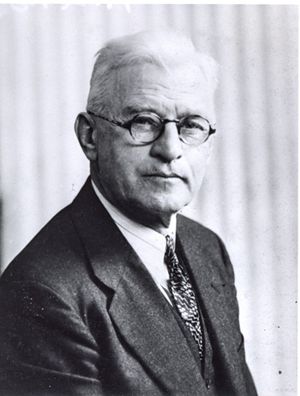 Johann’s father had a traveling milling business and Johann often accompanied him. His mother along with an infant sister died during childbirth in 1889. This left his father alone with three boys. When Johann was 11 his father died, and brothers Jacob, Peter and Johann were split up to be raised in different families. Johann went to live with Peter and Anna Willms (his mother’s sister) in Chortitza. It was a hard time as the Willms already had many children.

In 1927 Johann was arrested and imprisoned. He was held for 8 days and nights and on the ninth day was taken by armed guards to the court house where he was falsely accused of being a speculator in grain and cattle, and a priest and a counter-revolutionary. He was sentenced to eight months in prison and sent to Artjomovsk, formerly Bachmut, where he was forced to guard a rough group of prisoners. Johann was grateful to God for his protection from being beaten and tortured by the prisoners. If not for the food sent by his wife from time to time he was not sure how he would have survived the ordeal. When the spring season arrived, many prisoners who had been engaged in agriculture and who had established a record of good behavior were released in order to perform the seeding operations. Among those who gained this status was Johann. He was released from prison after 3 months and returned home.

The Braun family was able to stay on their farm until the fall of 1929 when the taxes became too unbearable. Johann was warned of an impending arrest by the authorities and was able to avoid arrest by fleeing to a neighboring town. Eventually, under the constant threat of arrest in Moscow, Johann was able to secure passage for his family out of Russia.

Braun was a refugee minister in Germany and was asked to stay on in 1930 but they chose to immigrate to Canada. They arrived in Canada on 21 June 1930 aboard the S.S. Montclare and traveled to Manitoba, settling in Morden. Here Johann ministered to the Russian immigrants and was the minister of the Morden Mennonite Brethren Church (now the Westside Community Church). He would preach the Sunday sermon at the Morden MB and then after lunch walk to the neighboring town and preach in the afternoon to the new Russian immigrants. He remained their minister from 1935 to 1943.

The family had many more trials when they came to Canada, including spinal surgery for their young daughter Katie in 1933, including 14 months spent recovering on a striker bed after surgery. While his family still lived in Morden he took on the job of teaching at the Coaldale Bible School from 1935-1936 to make ends meet.

In 1943 the family relocated to Arnold, British Columbia. Johann pastored the Arnold MB Church from 1943 to 1948. He was the first minister to the charter members when it was formed on 7 November 1943. Construction of the church building had begun in early 1943 and was finally completed in 1946. During Johann's years as a minister in Arnold, he was unpaid. To make ends meet, their daughter Manja moved to Vancouver to perform domestic work for various families.

Johann’s declining health forced him to relinquish his ministerial duties and for many years he was bedridden. He was lovingly cared for by his wife and daughter Manja for 7 years until he passed away at home in 1959 in Arnold, BC.