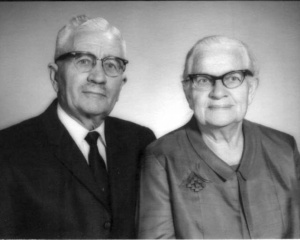 John K. Brandt was born 3 September 1891 in the village of Wasilovka, Naumenko Colony, South Russia. He was the tenth child born to Kornelius and Margareta (Rempel) Brandt. Five older siblings had died in infancy. A younger brother also died in infancy, leaving John as the youngest in a family of five.