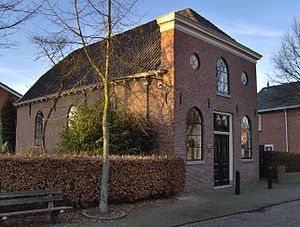 Borne is a town in the Dutch province of Overijssel (1950 pop. ca. 12,000; 2005 pop, ca. 20,000), the seat of a thriving textile industry and after about 1560, of a Mennonite congregation, the first members of which were said to have been weavers, refugees from Flanders; but judging by their names, they were more likely from Westphalia. They probably owed their safety to the magistrate of Twenthe, Count Bentinck, to whom they gave an annual gift of a piece of linen in gratitude for their protection. In the archives of the congregation there were some letters from 1749 and 1769, in which the Mennonites of Borne and Hengelo offered such a gift to the magistrate. Borne, Hengelo, and Goor together formed a single congregation belonging to the Groninger Old Flemish. Well toward the close of the 18th century they were still observing feetwashing with communion services, as was long the practice of the Groninger Old Flemish in the Netherlands.

In 1727 Borne separated peaceably from Hengelo and Goor. In the first half of the 18th century the well-known elder Hendrik Berents Hulshoff lived near Borne. Other noted preachers were Wolter ten Cate, 1736-1796, and Jan Pol, 1766-1807. After Pol's death the congregation called as its first trained minister Laurens van Cleeff (1809). Originally the congregation held its meetings on the Oude Paschen, a farm near Zenderen, later in the church in the village. In 1824 the church used in the 1950s was built; a small organ was added in 1866, which was replaced by a larger one in 1871.