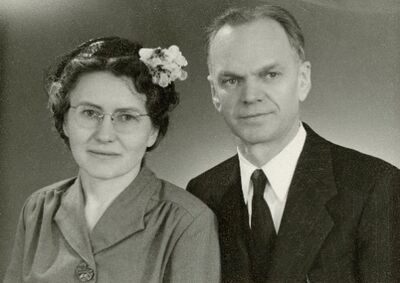 Cornelius Boldt: farmer, minister, teacher and photographer; born 6 November 1902 on the family farm near Osler, Northwest Territories to Jacob J. and Susanna (nee Lepp) Boldt. He was one of 19 children and the first to be born in Canada. His parents had arrived from Minnesota, USA in 1901. He died in Saskatoon on 13 January 2000 at age 97 and is buried in the Osler Mennonite Church Cemetery.

Cornelius received his elementary public schooling in the Altona S.D. #859 and matriculated from high-school at the German-English Academy (now called Rosthern Junior College) in 1925. He was baptized in Rosthern by Aeltester David Toews on 8 June 1924. He obtained his Normal School Teaching Certificate in Saskatoon in 1926. He then taught school in the Renfrew S.D. 4116 and LaBassee S.D. 4156, both public schools in the Rosthern School Superintendency #49 from 1926 to 1933.

Cornelius moved to Manitoba in the fall of 1933 and remained there until 1941. He taught in several public elementary schools. He also spent three years at Winkler Bible School graduating in 1940. He then graduated from Winnipeg Bible Institute in 1941. On 25 July 1935 he married Maria Friesen at the Winkler Bergthaler Church. Maria was born 16 December 1911 on a farm near Winkler, Manitoba to Heinrich and Katharina (nee Hildebrand) Friesen. She attended Zion elementary public school, before completing her high school at Winkler. She then attended Winkler Bible School where she met Cornelius.

Cornelius and Maria returned to Saskatchewan briefly in 1938 where, on August 8 he was ordained to the ministry at Osler Mennonite Church by Aeltester David Toews, alongside Jacob H. Pauls. Pauls would remain the minister at Osler for the next 25 years, but Boldt would usually leave to teach and do ministry elsewhere.

From 1941 to 1944 Cornelius and Maria lived on their small farm near Osler. They farmed and while doing so Cornelius also ministered at Osler Mennonite Church. From 1944 to 1947 Cornelius was the minister at Hague Mennonite Church just 10 miles from his Osler farm-home. During these years he also taught twice a week at Rosthern Bible School. At that time the academic school year began in November and ended in March. In 1948 Cornelius and Maria went to Mexico to serve under the Mission Board of the General Conference Church as a teacher.

In 1950 Cornelius and Maria moved to Manitoba where Cornelius taught again for several years.

The Boldts’ longest stay was in the La Crete – Fort Vermillion area in Alberta where Cornelius taught school for 7.5 years from 1955 to 1962. While there he developed strong relationships with Old Colony Mennonites through community-based church activities. He spent a year in Warman before ministering at Bluebird Mennonite Church and Park Valley Mennonite Church (also known as Bethel Mennonite Mission) in Saskatchewan for 7 years from 1963 to 1970.

Cornelius ministered at Ruddel House Church from 1970 to 1973. He ended his long career at First Mennonite Church in Saskatoon from 1973 to 1986. There he shared the German language ministry through preaching and visitation.

In 1986, Cornelius and Maria retired to Bethany Manor in Saskatoon where they lived until Cornelius died in 2000.

Cornelius wrote and published a dozen booklets mostly on faith and life subjects. He painted dozens of pictures of churches and other scenes onto hardboard. His 644 photographs are available on-line in the Mennonite Archival Information Database (MAID). The images are of the many groups of people he worked with and their surroundings. Cornelius was a deeply spiritual person, but wherever he went he was not interested in evangelizing them, but rather to help grow their faith. Cornelius and Maria lived frugally on the edge of ministry. Cornelius ministered to remote congregations, usually for no salary, except what he could earn from teaching. For Cornelius, it was a life’s calling. They left behind a bursary fund available to students wishing to attend Mennonite schools. Maria described herself as “Cornelius’s secretary”. She was his loyal companion always. She died on 13 November 2007 and was buried at the Osler Mennonite Church Cemetery.