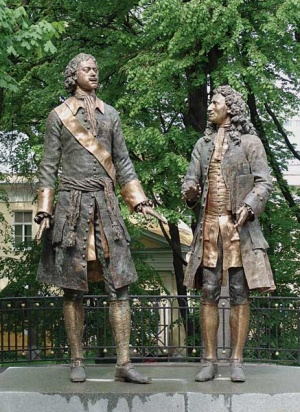 Sculpture by Leonid Baranov of Nicolaas Bidloo (right) beside Tsar Peter I, "The Great" on the grounds of N. Burdenko Military Hospital, Moscow.

Nicolaas Bidloo, vocationally a surgeon, was a Dutch Mennonite accomplished in many disciplines, including teaching, architecture, horticulture, and painting. His most notable accomplishment was service as the personal physician to Tsar Peter I, The Great (Пётр Вели́кий). In 1703 Bidloo settled in Moscow where he lived with his family until his death on 23 March 1735. Thus he was the first known Mennonite to settle in Imperial Russia. In modern times he is celebrated in Russia as one of the founders of Russian medicine but remained little remembered in Netherlands. His name in Russian is written as: Николай Бидлоо.

Nicolaas Bidloo was born in Amsterdam about 1673 or 1674 into the conservative Mennonite Bidloo family that was distinguished in medicine. His father, Lambert Bidloo (1638-1724), was a deacon in the conservative Mennonite Zonist congregation. Lambert mastered many languages, was a distinguished apothecary who wrote a Latin treatise on botany, and several works in the inter-Mennonite squabbling that dogged Dutch Mennonites in the 17th century. Nicolaas’s uncle, Govert Bidloo (1649-1713), was a distinguished anatomist, author of one of the best-known anatomy texts of the age, and the personal physician of the Stadholder later King William III of England. Nicolaas studied medicine under the world renowned physician Herman Boerhaave at Leiden University where his uncle Govert was Professor of Practical Medicine. Nicolaas began practicing medicine about 1690 but continued his studies. At the same time he became an accomplished painter, especially of portraits. In January 1697 he submitted his thesis and received an advanced doctorate in the medical sciences and in 1701 married Clasina Claes in Amsterdam.

In 1702, Nicolaas agreed to serve as personal physician to Tsar Peter the Great for a period of six years, at an annual salary of 2,500 Dutch guilders, unusually high compensation for a physician at that time. He arrived in Russia with his family in June 1703. Bidloo accompanied Peter the Great on his travels, but found himself with very little to do, as the tsar enjoyed excellent health. Though initially agreeing only to a six year stay, Nicolaas was induced to remain in Moscow all his life.

Peter the Great gave Nicolaas a large tract of land in the German Quarter on the bank of the Yauza River which was in the north east edge of Moscow and it was there that he and his family lived. On this land in 1706-1707 he built Russia’s first hospital and established its first medical school. In addition to administering the hospital, Nicolaas became an outstanding teacher instructing students in anatomy and demonstrating surgery. In 1710 Nicolaas wrote and published the first Russian textbook on medical studies, a 1,306-page manual of surgery entitled Instructio de chirurgia in theatro anatomico studiosis proposita a.d. 1710, januarii die 3, which was translated into Russian and republished in 1979 in Moscow. By 1723 Nicolaas’s school had trained at least 73 Russian physicians.

Nicolaas Bidloo was also acknowledged as an outstanding director of music and performances and as an accomplished architect and horticulturist. On his allotted land he used his artistic skills to design and build extensive Dutch style gardens including, ponds, dams, channels and islands which still exist in 2013. He also designed the triumphal gates and worked at reconstructing Golovinsky Palace (Головинский дворец) in what is presently called Lefortovo Park (Лефо́ртово парк). Between 1999 and 2005 archeological research was carried out in Lefortovo Park to restore the artistic and historical Dutch features developed by Bidloo. To highlight his work, a special exhibition: “Nicolaas Bidloo: history of a Dutchman in Russia” was held in Moscow in 2011-2013. It was organized by ANO “Central studio of artistic projects,” Moscow, Russia. As part of 300th anniversary celebrations of Russia’s first hospital held in 2007, a large sculpture of Tsar Peter I and Nicolaas Bidloo by Leonid Baranov was commissioned by the Moscow Bank Zenit (Зенит) and erected in 2008 on the premises of that first hospital, now named the N. N. Burdenko (Н.Н. Бурденко) Military Hospital.

Nicolaas Bidloo, born about 1670 at Amsterdam, son of Lambert Bidloo, was a versatile man. He was a doctor of medicine and at the same time an active artist (especially painted portraits). Later in life he became the personal physician of Peter the Great and the first director of the first medical school in Moscow. -- Nanne van der Zijpp