From GAMEO
Revision as of 15:27, 15 May 2015 by RichardThiessen (talk | contribs) (Created article; based on article from congregation's website.)
(diff) ← Older revision | Latest revision (diff) | Newer revision → (diff)
Jump to navigation Jump to search
A checked version of this page, approved on 15 May 2015, was based on this revision. 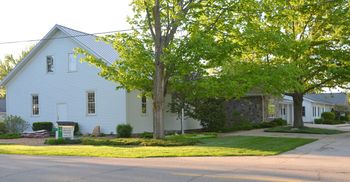 Berkey Avenue Mennonite Fellowship in Goshen, Indiana began in 1979 with members from Waterford Mennonite Church, East Goshen Mennonite Church, and a few other congregations in the Goshen area. The first worship service happened on 28 July 1979 at Bethany Christian High School. Attendance ranged from 28 to 50 persons during the first few months. That November the congregation moved to the Mennonite Mutual Aid building in Goshen (now Everence), where it met for nearly two years.

Because the German Baptist building only consisted of what is now the sanctuary, the congregation immediately broke ground for a 4,800 square-foot addition to the building. The congregation officially moved into the new building on 19 July 1981, with the dedication service taking place on 25 October 1981. In 1982 the average worship attendance reached 189, which remained the highest average attendance until 2004.

In September 1992, the congregation adopted a motto that came out of a church leaders’ retreat in 1987: "Called to be Christ’s loving, healing, caring presence." This motto has remained at the heart of the congregation’s self-identity ever since. Enthusiasm began to build and worship attendance increased after reaching a low of 113 in 1991-92.

In 1995-96, the congregation built a new Christian education wing along with offices and a library/conference room. In 1997 members unanimously approved a "Vision and Strategy for the Future" which embraced intimacy and invitation as primary values. This vision recognized the tension between these values but encouraged the church to value both equally. It further encouraged the church to maintain strength in worship, mission, and nurture while strengthening its welcoming ministry.

At the start of a new decade, three significant events occurred. First, long-time pastor Anita Yoder Kehr announced her resignation in order to move to Kansas. Second, the congregation recalibrated its vision to focus more on spiritual practices that draw us into intimacy with God and each other, as well as a new emphasis on living (rather than just being) the presence of Christ in the world. Third, the members adopted a revised structure to more clearly distinguish governance (provided by the Spiritual Leadership Team) from program ministry (provided by the pastors, commissions, and volunteers).

In 2011, the congregation fulfilled a long-standing dream when it bought the red house next to the church building, allowing for possible expansion in the future. A renovation project in 2010-11 upgraded the kitchen, carpet, wall paint, sanctuary lights, and speakers. A permanent visual installation called "Trees of Life" was also added. In 2013, two new paintings were hung in the fellowship hall to remind the congregation of its motto and to help prepare people for worship. A second renovation project in 2013 created a larger nursery and more usable classrooms.