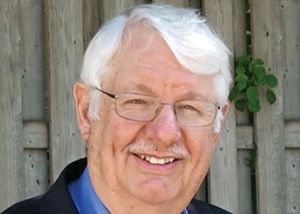 Richard “Dick” Benner was the editor/publisher of Canadian Mennonite magazine from 2009 to 2017. As well as editing various church and community newspapers over the years, he was employed by Eastern Mennonite University (EMU) in Harrisonburg, Virginia, USA as development director and later as assistant professor of communication (1999-2008).

Benner was born 13 April 1939 in Souderton, Pennsylvania and died 4 November 2017 at his home in Ruckersville, Virginia. He was the third of six children born to Paul Benner (13 March 1910-2 October 2003) and Margaret Longacre Benner (18 May 1911-2 May 1985). He had many fond memories of his growing-up years on the farm and his family’s support for Christian mission.

On 9 June 1962 Dick Benner married Marlene Keller (30 August 1941-13 July 2017), the daughter of Frank and Suetta Keller. Marlene was born in Pennsylvania and spent her childhood in Minnesota where her family was helping to establish a Mennonite church. She taught home economics for many years except for the years she spent raising their adopted daughters, Joy and Lisa. She also worked as a partner in the Benners’ newspaper and printing businesses.

Dick and Marlene were students at Eastern Mennonite College (EMC) in the early 1960s. Marlene graduated in 1963 after which they moved to Indiana where Benner began editing the “Mission News” pages for Gospel Herald. He then went on to work for other small newspapers before finishing his BA degree at EMC in 1969.

In the early 1970s the Benners bought a chain of weekly community newspapers in central Pennsylvania. After 13 years, which included some excitement when he helped rid the community of a pornography and drug operation, Benner sold the business and went on to earn his master’s degree in mass communication from Arizona State University, graduating in 1988.

The Benners then moved to Charlottesville, Virginia where they began a printing company. As their daughter Lisa and her husband, Tim Kaczmarek, increasingly took over the day-to-day operations, Dick spent some of his time serving as executive director of Shalom Foundation, a non-profit organization that published church print materials, writing for Mennonite Weekly Review and teaching communications at Eastern Mennonite University.

In 2009 the Benners moved to Waterloo, Ontario, Canada, to take the role of editor/publisher at Canadian Mennonite. Benner believed the newsmagazine was an important place for debate and discussion as well as for church news and devotional reading. His confrontational style was encouraged, but sometimes put him in conflict with church leaders and he was occasionally criticized for being too outspoken and political.

Although Benner was an American citizen, three of his siblings were long-time residents in Canada with Beatrice Benner and Louise Baerg in British Columbia and Stan in Waterloo Region at the time of his move. He developed a circle of friends at his church, Waterloo North Mennonite, and didn’t hesitate to ask for advice from other Mennonite leaders.

Over the years Benner wrote many editorials. In 1984 A collection was published in a booklet, Behind the Scenes. Perhaps his most poignant piece of writing was his editorial, “A living death” published 23 May 2016 in which he shared honestly about his struggle with his wife’s progressing dementia.

Benner will be remembered for his belief in the importance of stories, his love for the church and for being fearless when standing up for what is right.

Benner, Dick. Behind the Scenes: A collection of columns by Dick Benner, Publisher of the Bedford County Press and Shoppers Guide, 1973-1984. Privately printed, 1984, 92 pages.

Benner, Richard (Dick). “Moments of Grace” in Making a Difference in the Journey: The Geography of our Faith. Volume 4, Anabaptist Center for Religion and Society Memoirs, Eastern Mennonite University, Cascadia Publishing House, 2017.