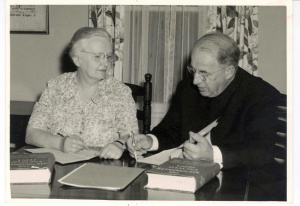 Elizabeth Horsch Bender is best known to the world of scholarship for her editing and translating skills and for her studies of the Mennonites as found in German and American literature. She was born to John and Christine (Funck) Horsch, in Elkhart, Indiana on 7 February 1895. She graduated from the Scottdale, Pennsylvania, high school in 1913. She attended Hesston College (Kansas) and Goshen College (1915-1918, BA).

Elizabeth Horsch taught two years, 1918-20, at Eastern Mennonite School, Harrisonburg, Virginia, teaching Latin, Greek, Spanish, geometry, psychology, and physical education. During the year 1920-1921 she taught at Hesston College. She set linotype for a year in Pittsburgh, after which she taught a year at the public high school in Johnstown, Pennsylvania (1922-1923). She married Harold S. Bender in 1923 (children: Mary Eleanor and Nancy Elizabeth). Bender taught at Goshen College most of the years from 1924 until her retirement in 1963. She taught German, but also Latin, English, and math (including analytic geometry and calculus). In 1943 she earned an MA in German literature at the University of Minnesota. Her thesis was a study of "The Mennonites in German Literature."

Elizabeth Bender edited almost all of Harold S. Bender's published books and articles, from the 1920s to 1962. She was a master translator, able to translate from Dutch, French, Spanish, Latin, and German into English, and into German. In the 1950s she translated into English the whole of the then-published volumes of the Mennonitisches Lexikon. These 1,700 pages emerged as the core of the [[Mennonite Encyclopedia, TheMennonite Encyclopedia(4 vols., 1955-59). As assistant editor, she also edited every ME article at every stage of the project. Bender was also a major office editor for the Mennonite Quarterly Review, 1927-85. From 1970 to 1985 she worked half-time for the Historical Committee of the Mennonite Church (MC), transcribing and translating German-language materials and editing manuscripts. She died 24 March 1988 in Goshen, Indiana.

See also the series of "Conversations with Elizabeth Bender " in Mennonite Historical Bulletin (January and July 1985, April and July 1986, January 1987).