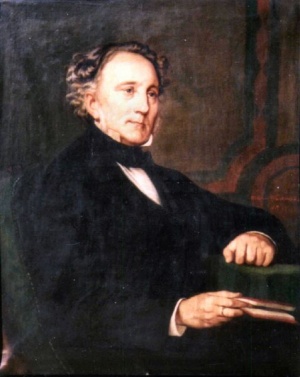 At the age of 14, Hermann became an apprentice in a Krefeld private bank. By the age of 31 his career had advanced to the point where he was a joint proprietor of the bank. In 1838 he founded his own bank under the name "von Beckerath-Heilmann."

Von Beckerath was a member of the Mennonite church in Krefeld and was an outstanding member of the unified Prussian Landtag of 1847, where he made a famous speech for the rights of religious minorities, and with convincing power pointed out to the state its duty to grant constitutional rights (suffrage and eligibility for the Landtag) to all its citizens, including the Jews, regardless of religious creed. This truly liberal address, which testifies to his noble mind, is honored by being presented in full in the book, Reden und Redner des vereinigten preussischen Landtags (Kopstadt, 47 f.).

In the following year he entered the German parliament which met in St. Paul’s Church at Frankfurt a.M., and was there elected German Minister of Finance, which post he filled from 5 August to 5 September 1848. When King Friedrich Wilhelm IV in a personal letter dated 19 September 1848, tried to induce him to enter the Prussian Cabinet, he declined because the king did not agree with his ideas and suggestions of liberty. Four days later he returned to the federal cabinet with most of his former colleagues. On 4 May 1849 he left it permanently, resigning because he was unable to concur in the acts and decisions to which the majority of the members had agreed. Since this act incurred the anger of his fellow citizens at Krefeld, he spent several weeks in Belgium, and another week in Godesberg, where he had acquired a country home several years later, in order to spend as much of his summer as possible at leisure.

From 1850 to 1853 he was one of the leaders of the liberal party in the Prussian Landtag. Though his health compelled him to give up parliamentary service, his efforts on behalf of his fellow citizens did not cease with his resignation. In 1862 his native city delegated him to represent them at the German trade conference at Munich. He was chosen chairman of the permanent committee of the conference and filled this office with outstanding success. On 19 November 1862 he had a noteworthy audience with King Wilhelm I, in which the king received him most graciously, conversing with him on political questions; Beckerath expressed his views freely and frankly.

It is worth noting that von Beckerath made a speech in the Parliament of 1848 in which he objected to granting any special exemption from military service to groups which had religious scruples against such service, and this even though he was a Mennonite himself, and well knew the historic position of Mennonites against military service and their (at that time) uniform stand in Germany for nonresistance.