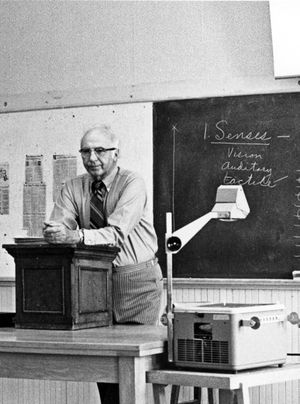 Alvin attended the Messiah Academy for two years, and completed his high school studies in 1938 at age 24. He enrolled at Bluffton College in 1939 and completed his bachelors degree in 1943 (he actually completed his final course work at Illinois State Normal School, having moved to Illinois to accept a pastorate). From 1946 to 1949 he continued his studies at Hartford Theology Seminary, completing his BD degree with honors in 1949. He continued working on his master’s thesis at Hartford, completing his STM degree there in 1952. His thesis examined the Amish community in Somerset County, Pennsylvania. In 1956 Alvin chose to continue his education and enrolled in Harvard Divinity School, from which he received his ThD in June, 1961. His dissertation was on the concept of grace in the radical reformation.

In 1968 Alvin joined the faculty at Bethel College, teaching religion and theology, and worked at Bethel until his retirement in 1978. He had earlier taught briefly at Bluffton College in 1953 and summer, 1965. Beachy was also active in various denominational and community groups. He spent a sabbatical year teaching at Eastern Mennonite College in the mid-1970s.

A number of articles by Beachy were published in the Mennonite Quarterly Review and Mennonite Life, and he edited the book, Worship as Celebration of Covenant and Incarnation. His dissertation on the Concept of Grace in the Radical Reformation was also published.