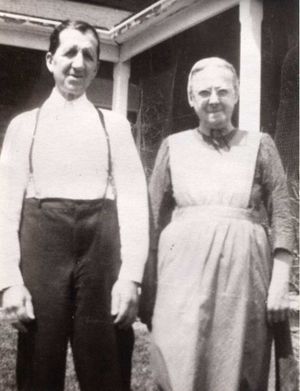 Jesse Bauman Bauman: bishop and farmer; b. 21 December 1892 five km. west of Elmira, Ontario to David and Elizabeth (Bauman) Bauman. He was the seventh child in a family of five sons and six daughters. He married Rebecca Martin (1893-1965) on 1 March 1917. They had one son and two daughters. Jesse died 24 October 1967 as the result of a fall suffered while at work. He was buried at the Elmira Mennonite Church.

Jesse grew up in the Old Order Mennonite church and farmed on a lot adjacent to his birthplace. As a young person he was not particularly devout, even after becoming a member of the church. He was among a large class baptized by Ezra L. Martin in 1915. On 4 July 1923 he was ordained as a minister by Ezra L. Martin for the West Woolwich area of the Old Order Mennonite Conference. On 3 October 1933 he was ordained as a bishop to assist Ezra Martin.

Jesse Bauman followed an interesting trajectory through three Mennonite conferences as he intersected with a variety of theological streams during his ministry. His leadership within the Old Order was controversial. He accepted a theology of revivalism and personal salvation that was becoming attractive to younger members of the Old Order community. The influence came from a number of sources, buy many thought he was unduly influenced by a Plymouth Brethren group located at Hawkesville, Ontario. He began to preach assurance of salvation—a concept foreign to traditional Mennonite ears. Although controversial, Bauman was part of the lot when a new bishop was chosen in 1933. Unrest at Bauman's leadership continued until the elder bishop, Ezra Martin, died in 1939. At this time other Old Order ministers made it clear Jesse Bauman was out of fellowship. He and a third of the Old Order members in Waterloo County joined the somewhat more liberal group at Markham, thus forming the Markham-Waterloo Mennonite Conference. This conference shared meetinghouses with the Old Order, but was open to the use of phones, automobiles and electricity.

Bauman's sojourn with the new Markham-Waterloo Conference lasted less than six months, however, because his doctrinal views were also unacceptable to the leadership of the new group. Bauman met separately with a group of his followers in late 1939 and early 1940, but by summer most of Bauman's group had either joined Mennonite Conference of Ontario congregations or the Plymouth Brethren. Jesse Bauman and about 50 of his followers joined the Elmira Mennonite Church in July 1940.

The Mennonite Conference of Ontario recognized Jesse Bauman as a minister, but not as a bishop, after he joined the Elmira congregation. He never became a congregational leader again, but he did supply preaching on occasion.

During his years at Elmira, Bauman also dabbled with Pentecostalism—he was "slain in the spirit" three times, and experienced speaking in tongues on a number of occasions.

Jesse Bauman's theological leanings influenced some in the Old Order Mennonite community to leave for more "evangelical" churches, whether it be for the "Conference" Mennonites or the Plymouth Brethren, and many left during the succeeding decades. His leadership gifts helped to revitalize the spiritual life of many persons but also created conflict and misunderstanding among others. His impact was profound, although ultimately his followers drifted in a wide variety of theological directions.