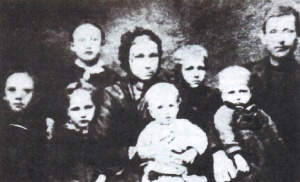 Maria L. Fast, Mennonite pioneer, was born on 27 June 1851 in the village of Lichtenau, Molotschna Colony, South Russia. She was the oldest of five children born to Heinrich Fast (1826-1890) and Maria (Scharlotte) Loepp (1828-1887). As a child, Maria moved with her family to the village of Pordenau, Molotschna where she attended school. They then moved on to Nicolaithal, part of the Borosenko colony which had been founded by the Kleine Gemeinde in 1865. Maria was baptized into the Kleine Gemeinde on 21 June 1871 and two years later married Gerhard Fast (1853-1887). Gerhard and Maria Fast immigrated to the United States in 1874. They first settled in Bridgewater, North Dakota where their first of seven children was born. They then moved to Parker, South Dakota where Gerhard died of typhus in 1887. He was 33 years old.

As a widow with seven young children, Maria had some difficult decisions to make. The church advised her to distribute her children, sell her house to pay her debts and go to work. Maria was given another option though when much to many people's surprise she received a proposal of marriage from Isaac Johann Harms (1811-1891). Although Isaac was 40 years her senior Maria accepted and they were married in the later half of 1887. Shortly there after Isaac and Maria Harms moved with Maria's seven children to Steinbach, Manitoba, probably to be closer to Maria's parents who had settled there in 1874. Tragedy struck in 1890 when Maria's youngest son Peter, age four, died after accidentally drinking lye water. The following year Isaac died leaving Maria a widow again after just four years of marriage.

Maria married Diedrich Martin Klassen (1829-1920) on 17 November 1891. Diedrich and Maria Klassen farmed in the Randolph area and were married for 29 years. During this time Maria's children grew up, married and left home; except for her second daughter Sarah, who had developed a condition that deformed her face. Sarah never married. More sorrow came in 1904 when Maria's second oldest son Gerhard died in a tree cutting accident. He left behind a widow, Helene Wiebe (1875-1966), with three small children and another on the way. As Diedrich Klassen grew older his hearing and vision began to deteriorate. He was completely deaf and blind by the time of his death in 1920.

Although Maria was 69 when her third husband died she decided to marry one last time. Jakob T. Barkman (1848-1935) became Maria's fourth husband on 6 March 1921. Jakob and Maria Barkman bought a farm in Kleefeld, Manitoba. It was here that they passed their retirement years together. Jakob died in 1935. Maria died two years later on 15 March 1937.

Maria L. Fast Harms Klassen Barkman truly was a remarkable woman, able to weather the storms of life and in so doing became an example of hope and perseverance for generations to come.