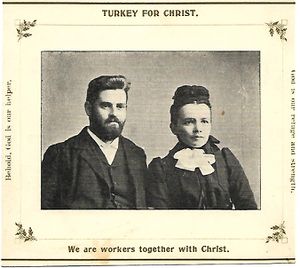 Ada (Moyer) Barker was a city mission preacher and missionary of the Canada/Ontario Conference of the Mennonite Brethren in Christ Church.

Ada Moyer was born 8 August 1875 at Jordan Station, Ontario, Canada to Allen Gehman Moyer (28 April 1848-4 October 1893) and his first wife, Dinah Rittenhouse (23 May 1848-19 May 1883). Ada was the third child (of five), the oldest daughter of at least three girls. She was married in Smyrna, Turkey, to Thomas Ford Barker on 2 June 1901. Ada and Ford had four daughters and one son: Grace, Ruth, Nellie, Evangeline and Theodore. One child with deafness was admitted to a school run by Alexander Graham Bell in Maryland, USA.

Ada Moyer's husband, T. Ford Barker, from New Brunswick, Canada, was born 14 November 1874 at Gibson, York County. His farming family descended from Loyalists. He was the fifth child of at least six (four boys and two girls). His parents were Thomas F. Barker (3 September 1828-26 December 1896) and his first wife Hannah Miles (1838-21 November 1874). The family were Church of England members. Ford was converted at 18 through the Salvation Army in St John, New Brunswick, and became an officer for six years against family opposition before launching out for six months of evangelism on his own. He joined the Mennonite Brethren in Christ at Bright, Ontario, and did two years of evangelistic work before sailing for Turkey in 1901.

On the other hand, Ada Moyer was converted at nine years of age at The Twenty, Ontario, the MBiC charge that became the Vineland MBiC church. She became a member at 16. Feeling God was calling her to missionary work, Ada took assignments with the city mission program of the Canada Conference 1897-1899: at Vineland, the East End Mission (Toronto), and then as a tabernacle (tent) evangelist. Her sister Laura also joined the city mission work in 1898.

Ada Moyer initially went to Turkey as a deaconess under John A. Sprunger's Light and Hope Association. In 1899 she helped with orphans surviving the massacres of Armenians of 1894-1895. She joined others in orphanages inherited from the American Board of Commissioners of Foreign Missions. Her work was soon to be organized as the United Orphanage and Mission Board. This independent mission had mainly Mennonite Brethren in Christ personnel. Funding came from Mennonite people in Europe and North America. Ada and a partner, Fredericka Honk, were assigned to the main orphanage at Hadjin and began language learning. Ada's evangelistic work in other towns and villages were greatly assisted by able Armenian converts such as Esther Haigazion and many young men. In time the mission added career training and arranging marriages to the orphanage work.

After two years in the field, Ford Barker was made the superintendent in Turkey, serving until 1914. The family had one extended furlough to Canada in 1908 due to illness. Just after a brutal siege of the Armenian town described by fellow missionary Rose Lambert, they buried one child in Turkey in 1909 shortly after returning. Famine conditions followed, with hundreds starving in the region while Ada and her fellow missionaries did what they could with few resources.

A second orphanage was opened at Everek, Turkey in 1912, and the Barkers transferred to the new city. Unfortunately, just when their mission seemed poised for expansion, the Ottoman Empire declared war on Britain and her allies in October 1914. As most of the missionaries were Canadians (British subjects), they fled, narrowly avoiding detention at the ports.

Back in Canada, Ada and Ford Barker took pastoral appointments with the Ontario Mennonite Brethren in Christ Conference at Collingwood and Clarksburg (1915-1917) and Squire (Kilsyth) (1917-1918). Ford was not well enough for the Barkers to join the Armenian mission in Turkey which re-opened briefly at the end of the war before further massacres of Armenians made refugees of the remnants. Ford and Ada were encouraged to work among Armenians and newcomers in Toronto and Hamilton when they were well enough (1917-1925). In 1925 they announced they were moving to Cleveland, Ohio, to continue the ministry. Ford maintained his credentials with the Ontario Conference, first, to “labor as the Lord may direct,” but retired fully in 1930 with serious health problems. From 1936 to his death on 22 May 1944, the Barkers lived in Fort Bradenton, Florida.

Ada Barker then lived close to her surviving children in Maryland. Her last years were spent at a Presbyterian Home for the elderly in Fairfax, Virginia, where she died in July 1982 at the age of 106. She too is buried at the Manasota Memorial Park, Bradenton, Florida.