From GAMEO
Revision as of 07:29, 20 November 2016 by RichardThiessen (talk | contribs) (Text replace - "emigrated to" to "immigrated to")
(diff) ← Older revision | Latest revision (diff) | Newer revision → (diff)
Jump to navigation Jump to search
A checked version of this page, approved on 20 November 2016, was based on this revision. 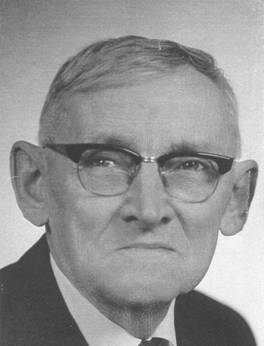 Abram Barg: inventor and farmer; born 18 September 1895 in Schönbrunn (Schönfeld Colony), Ukraine to Johann and Elizabeth Mathies Bärg. He attended elementary school in his village, the high school (Centralschule) in nearby Schönfeld and was accepted in the University of Moscow's Engineering department. Due to the political unrest of that time, however, Abram soon needed to return home. Abram and his future wife Helena Neufeld were baptized in 1917 and married on 11 February 1918 in the Schönfeld Mennonite Church. When life became dangerous in their village the couple moved to Waldheim, Molotschna. Here a daughter and two sons were born to them. Two daughters were born later in Canada. Abram died July 1986.

In 1924, the Barg family immigrated to Rosthern, Saskatchewan from Ukraine. In 1925 the family moved to Ontario, eventually settling in Leamington in 1928. After several years, Abram and Helena bought a half acre of land and built a home on the Albuna Townline. Abram worked on the Cox tobacco farm nearby in the summer, and in the winter months in Leamington's Rock City tobacco factory.

In 1933 Abram Barg became janitor at the Ridge School where he later taught woodworking to 30 boys. When the streetcar track between Leamington and Windsor was removed, Abram was given some railway ties from which he made a foundation for a greenhouse on their farm. He became the first early celery grower in the area. When World War II broke out, Abram had to leave his janitorial work because of his German nationality.

In 1944 Abram Barg built a boiler room in order to heat his greenhouses with steam and in 1948 he became the first Canadian to grow the long, seedless English cucumbers. That same year Mr. Bewly, an Experimental Farm Director in England, wrote Abram to say that they were compressing soil into blocks in which to grow plants. Bewly sent Abram a machine to make these blocks and as a result, Abram Barg was able to introduce the first soil block machine to Canada. By 1951 he made 800 soil blocks at the Harrow, Ontario Experimental farm where they grew melons. In 1958 Abram supervised the making of a soil block machine at the Wasco Machine shop in Essex, Ontario. For many years he traveled with this machine to make thousands of soil blocks for area greenhouse farmers. Abram became boiler engineer at the newly built Pyramid Canners in Leamington and eventually attained a third-class engineering license. In 1964 a Toronto company ordered a soil block machine identical to Barg's model from Modern Aircraft in Kingsville. The Toronto company paid him $1,000 for supplying the blueprint and supervising the work.

Abram Barg spent much of his time sharing his wealth of knowledge and promoting his products to those who would listen. He exemplified the type of person whose hard work and perseverance built this country. The highlight of his life occurred 15 January 1976, when the Essex County Associated Growers Association presented him with an Award of Merit for his many contributions to local agriculture.

Following his retirement, Abram Barg wrote his memoirs entitled "My Life, My Story" in which he told of good times and bad. The book contains copies of letters from many officials including personal letters from Prime Ministers Louis St. Laurent and Mackenzie King. One of his hobbies was woodcarving.

Abram Barg was a man far ahead of his time. Although he was often ridiculed by the area farmers, he did not allow this to break his spirit. He was lauded by government leaders and officials for his many achievements.