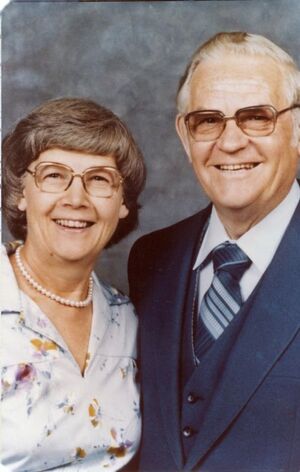 Henry’s family immigrated to Canada in October 1925 and settled in Eyebrow, Saskatchewan before the family relocated to Coaldale, Alberta. Henry was baptized on 25 August 1937 in the Coaldale Mennonite Brethren (MB) Church. In 1941, Henry married Justina and they farmed for 5 years. In 1946 they sold the farm and moved to Winnipeg. Henry studied at Mennonite Brethren Bible College (MBBC) and then at Tabor College, Hillsboro, Kansas. Henry also earned an MA in History at Wichita State University.

Henry was ordained to the ministry and pastored First Baptist Church in Durham, KS for 4 years and then Henderson MB Church in Henderson, NB from 1953 until 1956. They then returned to Manitoba, where Henry’s love of learning led him to become a professor of Christian Education and History at MBBC in Winnipeg in 1956, spending the first three summers as Director of Camp Arnes. After six years of teaching he received a call from the Portage Avenue MB Church and served as pastor from 1962 until 1969. During this time he worked on his doctorate in education.

Baerg became president of Winkler Bible Institute in 1969. The school underwent a very dynamic period of growth and he was able to exercise his capacities to the full. With keen devotion, he recruited staff and students, some from as far away as Africa and India. He served as president for 10 years until 1979.

In 1979, he became the pastor of the Kingwood Bible (MB) Church in Salem, Oregon. Following semi-retirement in 1982, came a total of five one-year interim pastorates at Valleyview Bible Church in Kamloops, BC, Grace Mennonite Church in Winkler, Manitoba, Elm Creek MB Church in Elm Creek, Manitoba, Lakeview Bible Church in Lethbridge, Alberta, and finally Henderson MB Church in Henderson, Nebraska again. Henry's last pastorate was with the small Immanuel Baptist Church in Salem, Oregon. The two bookends of his life were Baptist ministries. They lived in Oregon for 12 years, then retired to Chilliwack, BC in 1993 and joined Chilliwack Central MB Church.

Henry and Anne spent many memorable hours together with guests and in visitations before Anne, his loving and supportive companion, passed away in March 2001. It was often agreed by their friends that Henry possessed the physical and mental brawn while Anne was blessed with a great deal of emotional intelligence. One year later Henry married Erika Miller of Edmonton.

Throughout his life Henry was involved in a great deal of controversy which entailed continued dedication and commitment, realizing many successes and some disappointments and defeats. As he aged he continued growing and he was blessed with a spirit of humility and gratitude. Henry also enjoyed traveling and involved his children in a number of cross continent road trips. Other adventures included organizing tours around the world, taking four mission campaigns to India and 12 trips to Israel and beyond as tour leader, including two trips to the Soviet Union.

Baerg encouraged youth to get an education and exercised guidance and direction to thousands of old, middle-aged and young people. Henry's enthusiasm was infectious and people of all ages were drawn to him.