From GAMEO
(Redirected from Annakerk)
Jump to navigation Jump to search 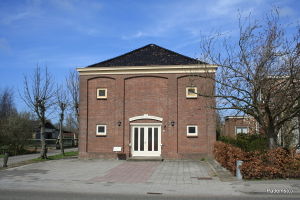 Sint (St.) Annaparochie (Anna-Parochie), a village in the Dutch province of Friesland, northwest of Leeuwarden, was formerly also called simply Annakerk. The village is built on land reclaimed from the Middenzee, which was dammed up in 1505 and was called Het Bildt; three villages were built on it, St. Anna-Parochie, St. Jacobi-Parochie, and Lieve-Vrouwen-Parochie. Leenaert Bouwens baptized a total of 197 persons in Het Bildt between 1563 and 1582, many of whom were no doubt residents of St. Anna; hence it is thought that a congregation dates to that time. The congregation was called Het Bildt in the early period; the name St. Annakerk was not used until 1644. For a time there were two congregations. One, which died out between 1757 and 1759, belonged to the Jan Jacobsgezinden. The other, which had a subsidiary in the neighboring Oudebildtzijl, had 18 members about 1700. Nothing is known about the history of this congregation in the 18th century. In 1808 the congregation of St. Annaparochie was dissolved; the church was torn down and the few remaining members joined the Oudebildtzijl. After 1806 the meetinghouse was used for various purposes. In 1808-1812  it lodged a platoon of French soldiers; finally it was torn down in 1869. In 1871, however, a new congregation was founded in St. Annaparochie and a church built in the next year. In 1873 the congregation called H. Ens as its first minister. From 1881 to 1896 St. Annaparochie was united for preaching service with Berlikum.

The congregation, composed in the 1950s largely of gardeners who were not wealthy, had a Sunday school for children, an organization for women, and one for the young people.