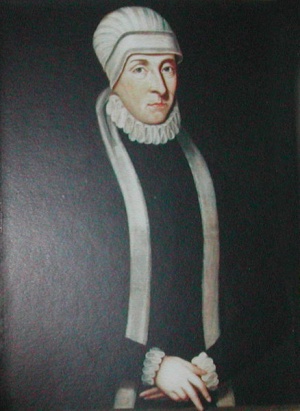 Anna evidently was aware of the great economic advantage of having Mennonite settlements in the country and therefore sought to protect them. In 1543 she received an imperial letter from Charles V concerning the Anabaptists. In the fall of the same year her brother-in-law, Johann I, Count of East Friesland, brought her another letter from the emperor, in which he asked for information about David Joris and possible measures against the Emden Anabaptists. She apparently paid little attention to it.

In 1544, in a sharp letter from Maria, sister of Charles V, and regent of the Netherlands, to East Friesland, Anna was ostracized and excommunicated as an offender against divine and imperial majesty, because she harbored those who had been declared to be enemies of God and the emperor. This made a deep impression. Immediately the government issued a mandate that all members of any sect, especially Anabaptists, were to leave the country at once, and that on penalty of severe punishment no one should venture to rent them houses and fields, land and goods, or offer them shelter. This mandate created consternation among the Anabaptists. When it appeared that they were on the point of leaving, John a Lasco intervened and procured from the duchess a new order, banishing only chronic agitators and fanatics among the Anabaptists. Nevertheless many peaceful Anabaptists emigrated, including Menno Simons. The above-mentioned mandate of 1544 is the first known document to use the term "Mennist."

On 6 April 1549 Anna issued a new edict against the Anabaptists, forbidding, on penalty of corporal punishment and confiscation of goods, any inhabitant of the realm to aid the Anabaptists in any manner. But it was apparently not strictly carried out. When she was charged with offering Anabaptists a friendly reception contrary to imperial instruction, she replied that his Majesty was poorly informed about the Anabaptists. Until her death Anna remained favorable to the Mennonites.

Anna died 24 September 1575 and was succeeded by sons Edzard II and Johann II.