Am Trakt Mennonite Church, also known as the Köppental-Orloff Mennonite Church, was organized in the Am Trakt Mennonite settlement in 1853. The first elder was Johann Wall, succeeded by David Hamm in 1858, and by Johannes Quiring in 1884. In 1905 the total number of souls in the church was 1,535, of whom 361 did not live within the settlement proper, with 775 baptized members, of whom 200 lived outside the settlement. In addition to the elder, the following served the congregation as ministers: Peter Wiens, Peter Bergmann, Hermann Neufeld, Jakob Bergmann, Johann Toews, and Heinrich Neufeld. P. M. Friesen lists also Cornelius Fröse, J. J. Epp, Isaac Epp, Johannes Janzen, Aron Wiebe, Jakob Quiring. In 1913 Peter J. Dyck was listed as leading minister. Another source states that Peter Wiens succeeded Johannes Quiring when he died in 1912. Elder Hamm was instrumental in organizing the Allgemeine Bundeskonferenz der Mennonitengemeinden in Russland. 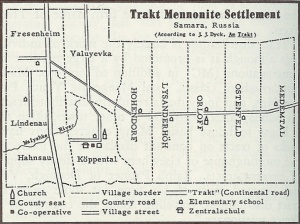 While Hamm was elder (1880) the congregation went through a crisis caused by Claas Epp Jr., who, under the influence of some chiliastic writings and because of the introduction of universal military conscription, sought with a group of followers a place of refuge in Central Asia. Particularly the village of Hahnsau was involved in this movement. The congregation had two meetinghouses, one in Köppental (erected in 1866) and the other in Orloff. In 1900-1912, under the eldership of P. Wiens, Mennonite Brethren (MB) evangelists visited the settlement and organized an MB congregation, about which little information is available. In the early days there was a Hahnsau and Popovka MB Church, which was discontinued. Under the Soviet government the congregation went through a trying period similar to that of other settlements. During this time Cornelius Nikkel was elder, assisted by the ministers Julius Siebert, Jakob Penner, and Franz Quiring, who was especially successful with the young people. In 1927 Nikkel and Quiring were exiled. The leaders helped the young men of conscription age to be freed from military service. Religious activities were gradually made impossible, and in 1941 when Germany invaded the Ukraine, all settlers were exiled, primarily to Asiatic Russia.