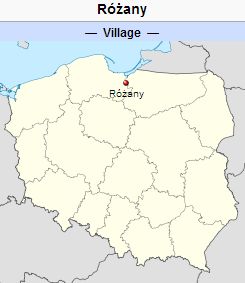 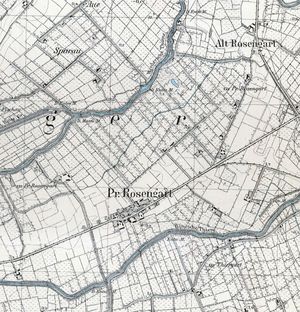 Alt Rosengart was probably established between 1296 and 1298. In 1355, privileges were renewed by Konrad von Bruningsheim under the Chełmno law (Kulm Law, a legal constitution for a municipal form of government). At the time, the village had 59 włókas (1,059 hectares) of land. Dutch colonists arrived in 1599. In 1631, the village was leased to Kaspar Platen, in 1647 to Izaak Spieringow, and in 1663 to Aleksander Jungschultzow.

Until 1772 the village was located in what was known as Royal Prussia (also known as Polish Prussia) in the Kingdom of Poland. The First Partition of Poland in 1772 resulted in the creation of a new province in 1773, called West Prussia, in which the village was located. The village was situated in the district (Kreis) of Marienburg until the end of World War I, when it came under the jurisdiction of the German province of East Prussia. At the outbreak of World War II in 1939, it came under the control of Nazi Germany. In February 1945 it was occupied by Soviet forces and eventually returned to Poland. In 2012 it was a village in the administrative district of Gmina Gronowo Elbląskie, within Elbląg County, Warmian-Masurian Voivodeship.

Mennonites who were residents of Alt Rosengart were members of the Thiensdorf-Markushof Mennonite Church.