From GAMEO
Revision as of 07:20, 27 March 2014 by RichardThiessen (talk | contribs)
(diff) ← Older revision | Latest revision (diff) | Newer revision → (diff)
Jump to navigation Jump to search
A checked version of this page, approved on 27 March 2014, was based on this revision. 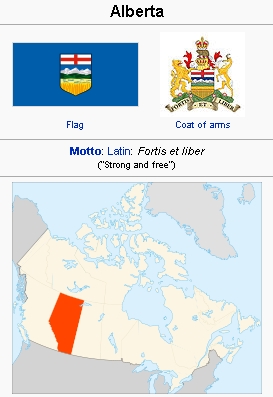 Alberta is the most westerly of the three prairie provinces of Canada. The province is bounded by the provinces of British Columbia to the west and Saskatchewan to the east, the Northwest Territories to the north, and the U.S. state of Montana to the south. Alberta covers 661,848 km2 (255,541 sq mi) and in 2010 had an estimated population of 3,724,832. Most of the northern half of the province is boreal forest, while the Rocky Mountains along the southwestern boundary are largely forested. The southern part of the province is prairie, and the central aspen parkland region contains the most fertile soil in the province and most of the population, including Edmonton, the capital, and Calgary. Much of the unforested part of Alberta is given over either to grain or to dairy farming, with mixed farming more common in the north and center, while ranching and irrigated agriculture predominate in the south.

Alberta is named after Princess Louise Caroline Alberta (1848–1939), a daughter of Queen Victoria. Princess Louise was the wife of the Marquess of Lorne, Governor General of Canada from 1878 to 1883.

The first aboriginals settled in what is now Alberta around 10,000 years ago. Their descendants formed several tribes, including the Blackfoot, the Cree, and the Chipewyan. English and French fur traders settled in the area in the mid-18th century. Eventually most the area became a part of Rupert's Land, controlled by the Hudson's Bay Company. The southern most part of what is now Alberta was part of the Louisiana territory and was ceded to Great Britain in 1818. In 1870, Rupert's Land was purchased by the Canadian government and became the Northwest Territories. The district of Alberta was created in 1882 and in 1905 Alberta became a province of Canada.

Alberta has experienced steady growth in terms of its population for over a century. A large number of immigrants settled in Alberta throughout the first three decades of the 20th century, with continued steady growth into the 21st century. Alberta is the third most diverse province in terms of visible minorities after British Columbia and Ontario with 13.9% of the population consisting of visible minorities. Nearly one-fourth of the populations of Calgary and Edmonton belong to a visible minority group.  In the 2006 Canadian census, the most commonly reported ethnic origins among Albertans were: English, 27.2%; German, 20.9%; Scottish, 20.3%; Irish, 16.6%; French, 11.9%; Ukrainian, 10.2%; Dutch, 5.3%; Polish, 5.2%; North American Indian, 5.2%; Norwegian, 4.4%; Chinese, 4.2%; Swedish, 2.9%; Russian, 2.8%; East Indian, 2.7%; Métis (those of mixed aboriginal and European descent), 2.6%; Italian, 2.5%, and Welsh, 2.3% (each person could choose as many ethnicities as were applicable). 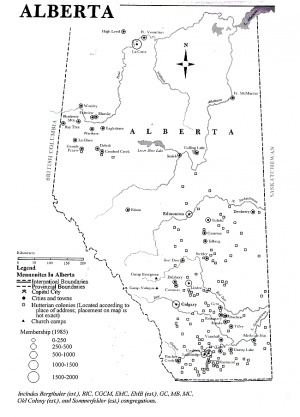 In 1893 Jacob Y. Shantz of Berlin, Ontario (now Kitchener, Ontario) selected Didsbury, Alberta, 80 km north of Calgary, as a suitable location for a new Mennonite settlement and in the following year established a colony of 34 Waterloo County, Ontario residents in that area. This pioneer Mennonite Brethren in Christ (in 1998 known as the Evangelical Missionary Church) settlement in Alberta grew in size during the years so that by 1951 there were about 500 members. In 1997 there were 36 congregations in Alberta belonging to the Evangelical Missionary Church, Canada West Conference.

Members of the Church of God in Christ, Mennonite organized congregations in Linden (founded 1902) and Rosedale (founded 1928). The combined membership in 1996 was almost 1,200.

In 1932 Old Colony Mennonites left Saskatchewan to found a new colony in the Peace River area in northern Alberta. The settlement at La Crete had grown to a membership of 130 by 1950, with additions of dissatisfied families coming from Mexico. By 1990 there were over 2,000 Old Colony Mennonites (including children) in Alberta.

The Evangelical Mennonite Conference (Kleine Gemeinde) had seven congregations in Alberta in 1996 with a total membership of 350. The conference began its activity in Alberta in the early 1970s, and was particularly successful in outreach among Old Colony and Sommerfelder Mennonites in the La Crete area.

The total Mennonite population in Alberta (not including Hutterites) in 1991 was more than 22,300.

The most westerly of the three prairie provinces of Canada, Alberta extends 750 miles north of the United States boundary and averages from 250 to 400 miles wide, with an area of 255,000 sq. mi. and a population of 796,169 in 1941. Three fifths of its area is suitable for agriculture. Southern Alberta specializes in grain farming; central Alberta, the most densely populated, in mixed farming; and northern Alberta, the most rapidly growing section, in forestry, farming, and oil and gas. It is the leading coal producer among the provinces and has extensive oil and gas fields. Its Banff and Jasper national parks in the Rocky Mountains are world-famous.

In 1893 Jacob Y. Shantz of Ontario selected Didsbury, Alberta, 50 miles north of Calgary, as a suitable location for a new Mennonite settle­ment and in the following year established a colony of 34 Waterloo County, Ontario, residents in that area. This pioneer Mennonite (Mennonite Brethren in Christ) settlement in Al­berta grew in size during the years so that by 1951 there were 24 ministers of that church (now United Missionary Church) serving there, with about 500 members.

In April 1901 Mennonite (Mennonite Church) settlers from Waterloo County joined others of their number in the area of Carstairs-Didsbury so that it was possible in that year to organize the West Zion congregation and build a church. A similar group of settlers organized a congregation in the same year near High River, 40 miles south of Calgary. Mennonites (Old Order Mennonite) from northwestern Iowa settled near Mayton, Alberta, in 1901, organizing the Mayton Mennonite Church in 1903. Other settlers came from Indiana and Michigan in 1910 and a few years later organized the now extinct Clearwater Mennonite congregation. The Salem Mennonite Church near Tofield, of Amish Mennonite origin, was established by settlers who came from Iowa and Nebraska from 1910 to 1913. The Duchess Mennonite Church, 100 miles east of Calgary, was established by settlers from Eastern Pennsylvania in 1915. The Alberta District Conference (Mennonite Church) was organized in 1904 and the Alberta-Saskatchewan Conference in 1907. In 1953 eight congregations with a membership of 490 were located in Alberta.

A larger number of Alberta Mennonites are those belonging to the General Conference Men­nonite Church. In 1953 there were 1,174 members in seven congregations: Bergthal at Didsbury; Blumenthal at Pincher Creek; Coaldale at Coaldale; Scarboro, Calgary; Schoensee, Tofield; Vauxhall-Grantham, Vauxhall; Westheim, Rose­mary. The first General Conference Mennonite settlers had moved into Alberta from Manitoba as early as 1901. The majority, however, settled in the area after World War I, most being of the newer immigration from Russia 1922-1927.

The Mennonite Brethren in 1951 had ten churches in the area with a membership of 1,124. These con­gregations were Vauxhall, Grassy Lake, Namaka, Gem, Coaldale, Lindbrook, Pincher Creek, Linden, Rosemary, and La Glace. Their settlement in Al­berta began in 1926 with the establishment of the community at Coaldale, and all of the settlers are of the 1922-27 immigration from Russia.

Other Mennonite groups in Alberta include the two congregations of the Church of God in Christ, Mennonite, Linden (founded 1902) and Rosedale (f. 1928), which have a membership of 436. In 1932 Old Colony Mennonites left Saskatchewan to found a new colony in the Peace River area in northern Alberta. The settlement near Fort Vermillion had grown to a membership of 130 by 1950, with addi­tions of dissatisfied families coming from Mexico. The Evangelical Mennonite Brethren Conference had two congregations in Alberta, Swalwell and Namaka. Their settlement was begun in Swalwell in 1933, but the two church­es have recently joined the Mennonite Brethren conference.

Since 1918 the Hutterian Brethren have been establishing colonies in Alberta. Their 29 colonies in 1950 had a combined population of 4,200. Most of their Alberta colonies are located in the south­western part of the province, south and southwest of Lethbridge and MacLeod, although others are scattered north almost to Edmonton.

The total baptized Mennonite membership of Alberta in 1953 was more than 4,000, in addition to the Hutterites and United Missionary Church (formerly Mennonite Brethren in Christ). -- Melvin Gingerich