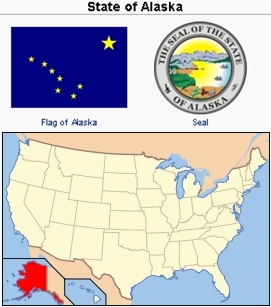 Although Mennonites did not have a church in Alaska for many years, they were interested in the region as a missionary field in the 19th century. The 1878 conference session of the General Conference Mennonite Church decided that S. S. Haury of Summerfield, Illinois should investigate the possibilities of mission work in Alaska, with a view to immediate beginning. In March 1879 Haury, accompanied by J. B. Baer left for Alaska. Both men taught school for a time while exploring the situation. After spending two months on Kodiak Island and some time at Cook's Inlet and finding no unoccupied field, they returned to the states. Later it appeared that Sitka might offer an open field but when it became evident that the Presbyterians planned to resume work there, the Mennonite plans were dropped. Haury soon began his missionary work among the Arapaho of the Indian Territory.

Later there was intermittent interest in Alaska. In 1896 John K. Brubaker, a minister in the Lancaster Mennonite Conference, accompanied by J. S. Lehman, made a four months' evangelistic trip to Alaska. In 1949 Mahlon Stoltzfus and William Anders flew their plane to Alaska for the purpose of investigating mission opportunities which the Mennonite Church might enter in that country. Their report suggested that Alaska presented many opportunities for Christian service and evangelism.

In 1947, Linford Hackman, pilot and beloved Alberta Mennonite minister, saw mission possibilities in Alaska. Self-supporting church workers Mahlon and Hilda Stoltzfus collaborated with the Covenant Church at the village of Fortuna Ledge (Marshall) (1952-57) and led a voluntary service unit at the village of Russian Mission until 1961. In 1978 Hackman encouraged Mennonites in Anchorage to form the Anchorage Mennonite Fellowship (18 members, 2003) which affiliated in 1981 with the Northwest Mennonite Conference. After the formation of Mennonite Church Canada and Mennonite Church USA in 1999 the congregation joined the Pacific Northwest Conference of Mennonite Church USA.