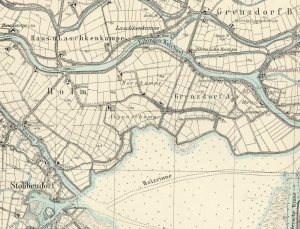 Abgunstkampe (also known as Abgunst Kampe; coordinates: 54.267, 19.204 [54° 16′ 1″ N, 19° 12′ 14″ E]; population in 1852, 19) was located approximately 8 kilometers (5 miles) north-east of Nowy Dwór Gdański (Tiegenhof), 16 km. (10 miles) north-west of Elbląg (Elbing), and 28 km. (17 miles) north-east of Malbork (Marienburg). Abgunstkampe was located south-east of Holm, south of Hornkampe, and south-west of Grenzdorf A, along the northern shore of the south-west corner of the Vistula Lagoon (Frisches Haff). Eventually, land in the south-west corner of the lagoon was reclaimed and the settlement was gradually converted into agricultural land.

Until 1793 Abgunstkampe was part of Danzig in Royal Prussia (also known as Polish Prussia) in the Kingdom of Poland. The Second Partition of Poland in 1793 added Danzig and its surrounding territory to the province of West Prussia. Abgunstkampe was situated in the district (Kreis) of Marienburg until the establishment of the Free City of Danzig in 1920. The village came under the control of Nazi Germany during World War II until February 1945, when it was occupied by Soviet forces and returned to Poland.

The Danzig census of 1793 reported two Mennonite families with a total of 8 individuals in Abgunstkampe with the surnames of Dick and Goerke. In 1820 Abgunstkampe had 14 inhabitants, of which nine were Mennonite.

Mennonites who were residents of Abgunstkampe were members of the Tiegenhagen Mennonite Church.