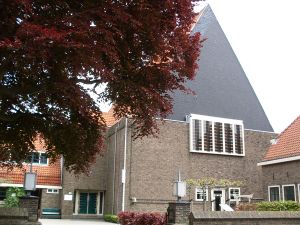 There must have been Anabaptists living here as early as 1534, for on 10 April of that year two inhabitants of Aalsmeer, both with the name of Jan Dirks, were among the three Anabaptists who opened the long series of martyrs in the Netherlands (Kühler, Geschiedenis I, 107). They remained steadfast, "going to their death like sheep, so that it was amazing to see." Presumably these Anabaptists lived for the most part in safe hiding places in these swamps and marshes, "out of the world" (uit-den-weg: out of the way), of which the street (Menniste Buurt) is still a reminder. In March 1597 a resolution of the States-General indicates that they were quite numerous in this region by that time.

Very early there were here congregations of the so-called Frisians, Waterlanders and Flemish. The Frisians met for worship in a vermaning (meetinghouse) at the end of Uiterweg 378, called De Vermaning and later De Oude Vermaning; the Waterlanders met in De Zandberg, Uiterweg fourteen; the Flemish in De Leeuwenkuil, Uiterweg seventy-nine.

About 1640 a division occurred among the Flemish; the enforcement of eenvoud (nonconformity) had stirred up feeling, so the preciezen (strict) began to meet in a meetinghouse on the Zijdweg, while the rekkelijken (more liberal) remained in De Leeuwenkuil. In 1687 the breach between the Flemish, Old Flemish and Waterlanders was healed, and from that time on they were known as the Vereenigde Waterlandse en Vlaamse Doopsgezinde Gemeente and held their meetings at the Zijdweg. The decline in membership was an urgent factor in this union, for together they had scarcely fifty-seven members. This congregation in 1738 called Jan de Bleyker of Middelharnis as its first salaried minister. The church was burned down in 1844, but was rebuilt in 1845.

The Frisian congregation was larger. It held strictly to tradition on all points; but not much is known about its history. Under the leadership of four preachers chosen by the congregation without previous discussion with the candidates (zonder voorafspraak: they were not to decline before the call, for the voice of the congregation was considered as vox Dei) they developed a strong spiritual life.

About 1780 this congregation also had a division for the reason that a voorafspraak (previous consultation) was held about the choice of a preacher, the preciezen condemning this step. Then in 1787 the Nieuwe Vermaning, Uiterweg 354, was used by one part of the group, and the congregation funds were divided. For a long time relations between the Oude Vermaning group and the Nieuwe Vermaning group (the groups were known by the names of their churches) were so strained that it was forbidden by each group to marry into the other. Nevertheless both groups observed the old customs as strictly as possible, even the principle of the lay ministry. As late as 1861 in choosing a minister this statement was still used: "We believe and testify that there is a need of workers in the vineyard of the Lord, we must not get them from an academy or university, but must choose them by majority vote from the midst of the brotherhood." But on the other hand, it also occurred that a preacher crossed Haarlem Lake with his fishing boat, attended services at Haarlem, and the next week preached the sermon he heard there to his own congregation. It also happened that young men preferred to remain outside the congregation rather than run the risk of being called to the ministry, because young men had to promise at their baptism to take upon themselves the obligation of the ministry in case they should be chosen.

On 8 June 1866 after a long conference tactfully conducted, the three congregations, the Oude Vermaning, the Nieuwe Vermaning, and that on the Zijdweg, with a total of about four hundred members, united into the Doopsgezinde Gemeente Aalsmeer (Mennonite Church of Aalsmeer), having previously, on 22 October 1865, held a joint communion service. Pastor Simon Gorter of the congregation on the Zijdweg deserves much of the credit for bringing this union about, although it took place during Brouwer's term. The old churches were unfortunately all torn down and replaced by a new large church (1867).

Now came the golden age of the congregation; in the fifty years after the merger the membership doubled. In 1913 the membership stood at 870, with about five hundred catechumens and a total of two thousand  souls. In 1949 these were the figures: 781 members with about 520 households, about 340 catechumens, about 800 boys and girls between eight and twenty, who attended Westhill Sunday school services, and about six hundred non-member households, who nevertheless maintained contact with the congregation, making an estimated total of about four thousand souls.

Whence this difference in size? First, the modernist trend (beginning with Pastor L. van Cleeff, 1887-1905) relaxed the bonds with the old tradition. Second, the increased prosperity of the first thirty years of the twentieth century placed the members, almost exclusively gardeners, more "into the world." Third, an unreligious, though not antireligious socialism obtained a foothold in this congregation. Through these three influences the church received an influx of new members. When the new church was built in 1928 (planned by the architect J. F. Staal), seating room for six hundred was considered adequate (the church built in 1867 under van Cleeff was enlarged to provide eight hundred seats). Although the position of the church "in the world" is much more difficult than formerly ("uit den weg" is still generally felt) it is agreed that it is impossible to move back into the past and that the church must assume and strengthen its position in this situation.

Of importance in accomplishing this purpose was the Westhill (Sunday school) work begun in 1927, which brought boys and girls of four to twenty years together in the service of their age group wherever possible. In strong regular growth the Westhill work increased by the early 1950s to twenty eight divisions with more than eight hundred girls and boys, with 160 leaders, assistants, organists, and about thirty workers behind the scene. These services were very faithfully attended  (89 percent). This work was also of significance for the entire country through a course in leadership and the publication of three periodicals: De Bloem in Knop (The Flower in Bud) for the four- to seven-year-olds, Ontplooing (Unfolding) for the eight- to twelve-year-olds, and Jonge Bloei (Young Blossom) for the thirteen- to twenty-year-olds and older. In addition the congregation issued a monthly youth periodical, De Toorts (The Torch) and a monthly congregational paper, Levenslicht (Light of Life). In Aalsmeer-East and Aalsmeer-West districts were established for religious services which were held once in two weeks. Thus in 1950 the Aalsmeer congregation had twenty six group services on every Sunday from September to June, most of which were conducted by lay members. In the congregation there were further a women's organization, a members' group, four youth groups (total of 110 members), a girls' workshop, and a library.

The history of the congregation had far not been written by 1950. In the Doopsgezinde Jaarboekje of 1920 Rev. Luikinga wrote a good sketch, "Langs een oude Vermaning." On the occasion of the third centennial of the founding of the congregation on the Zijdweg a booklet by D. W. Keesen Az. appeared, containing a brief chronicle of the most important events in the congregation. In this excellent portfolio pictures of the Aalsmeer churches as well as important facts were made available. The ministers who served the congregation after the union were P. Brouwer, 1863-1887; L. van Cleeff, 1887-1905; W. Luikinga, 1907-1915; H. C. Barthel, 1916-1926; R. C. de Lange following 1927.